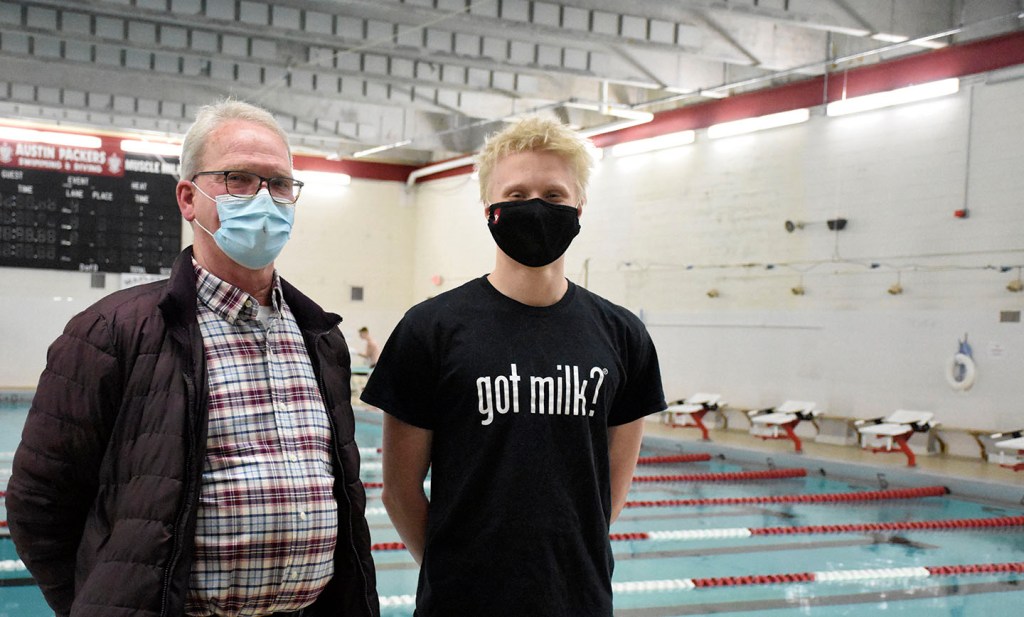 It’s been 50 years since Terry Reding was a state champion for the Packers, but he still gets a smile on his face when he steps into Bud Higgins Pool at Ellis Middle School.

Reding was back in his hometown this past week where he paid a visit to Logan Kelly, an Austin senior swimmer who is hoping to match Reding’s feat of winning a state title in the 100-yard breaststroke.

“I sure hope he wins it,” Reding said of Kelly’s chase to win a 100-yard breaststroke title this Saturday. “When I see the times he puts up, it’s like ‘holy crap, he went how fast?’”

Reding held the AHS 100-yard breaststroke record for 10 years before John Higgins, the son of former AHS head coach Bud Higgins, broke the record. Kelly took Higgins record and he will have his name plastered all over AHS’s record books as he heads off to swim at Division I Indiana University-Purdue University Indianapolis next year.

Kelly met Reding for the first time this week, but he knew Austin’s last state champ a little better as he was a middle schooler when Craig Heimark won the state title in the 200-yard freestyle in  2015.

Kelly, who holds AHS records in the 200-yard individual medley, the 200-yard breaststroke, the 100-yard freestyle and the 500-yard freestyle,  may have put up some big performances himself, but he still doesn’t feel he has equaled the feats of swimmers like Reding and Heimark.

“If I’m being honest, I don’t feel my name means as much as Craig’s (and some of those guys),” Kelly said. “They’ve just been up there on the board my entire time swimming. I swam with Craig a couple of times but I didn’t get to talk to him too much because I was a seventh-grader.”

Austin boys swimming and diving head coach Ryan Kelly, who is also Logan’s dad, said that it was great for his son and the rest of Austin’s state qualifiers to meet a Packer legend.

“I love hearing stories about the old days. I think it’s spectacular to learn about the background and the history of the program,” Ryan said. “It’s really cool to gain an appreciation for this program. That can do nothing but help our guys as they grow. They might not understand it quite as much right now, but hopefully later on down the road, they understand more of what they’re being a part of.”

Reding recalls swimming at the high school and holding meets at the YMCA during his junior season, but he was one of the first swimmers ever to step into Bud Higgins Pool, giving it a test run while they were filling it up.

“We jumped into the four-foot end and we swam down to the other end. It was polar plunge cold and it was seven feet deep at the other end,” Reding said. “We were all freezing and nobody could get up and grab the wall to climb out of the pool.”

Reding is already in the AHS athletic Hall of Fame, but he still has a hard time grasping how long it’s been since he swam for the Packers.