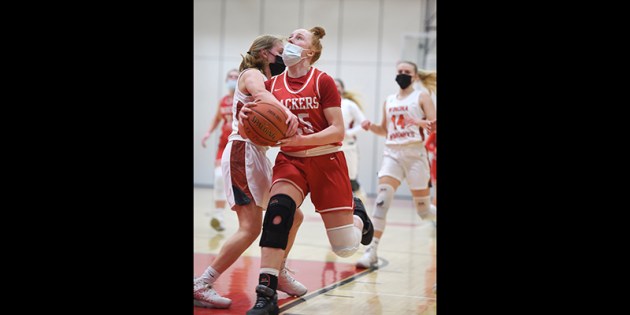 Austin’s Cassidy Shute is fouled on the drive during the first half against Winona in a Section 1AAA Tournament opener Tuesday night in Ove Berven Gym. Eric Johnson/photodesk@austindailyherald.com 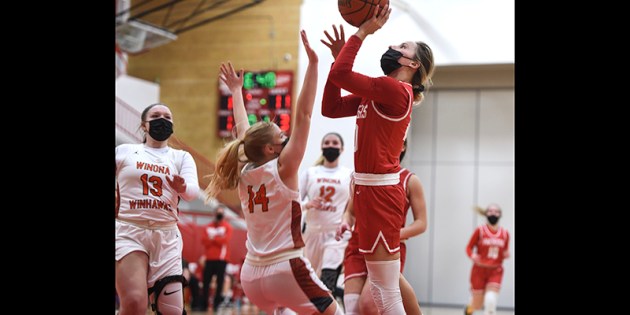 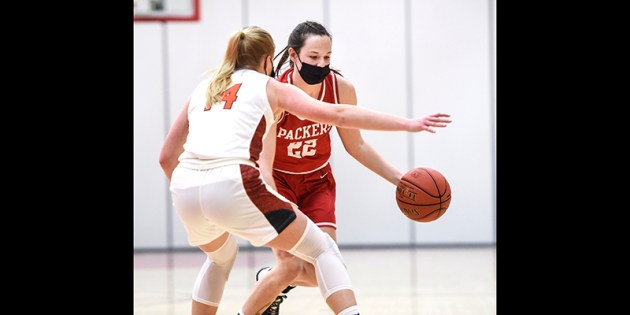 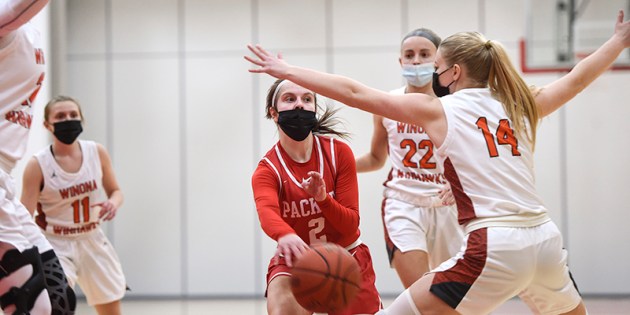 Austin’s Hope Dudycha dumps the ball off while driving during the first half against Winona Tuesday night in the first round of the Section 1AAA Tournament in Ove Berven Gym. Eric Johnson/photodesk@austindailyherald.com 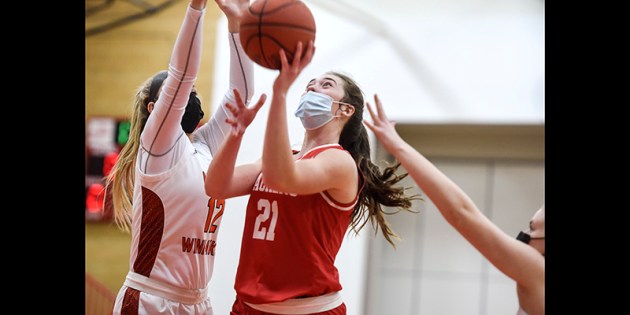 The No. 3 seeded Austin girls basketball team was back in Ove Beven Gym for a home game Tuesday night for the first time in nearly a month and they delivered a solid performance as they took down No. 6 seeded Winona 61-23.

Austin junior Emma Dudycha had a big night as she drilled six threes en route to scoring 19 points. Dudycha still had a scar and a band-aid on her nose from a collision during Austin’s upset win over Mankato East last week, but she came out firing with three first-half threes on Tuesday.

“I knocked heads with an East girl, but I got my stitches out today. It’s all good,” Dudycha said. “I was feeling it in warm ups and my teammates did a good job of finding me.”

The Packers held a virtual practice on Monday due to a snowstorm, using it to watch film of the Winhawks. Austin head coach Eric Zoske thought his team did a great job of pressuring Winona, but his team still has to get its legs back after sitting through a two-week quarantine in late February and early March.

“This has been a mess of a schedule. We’re just trying to do the best that we can every single day,” Zoske said. “Today is today and tomorrow is not guaranteed. It’s unfortunate what these kids have gone through in the last 12 months and I just hope that wherever the season ends, we’re able to end it on the floor.”

Austin senior Elyse Hebrink finished with five points, four rebounds and three steals in what could be her last contest in Ove Berven Gym — the same place she grew up watching her older sisters play.

“I was definitely excited to play here because we haven’t had a home game in a really long time,” Hebrink said. “It’s really sad to think about now. This is probably one of the best teams I’ve ever been a part of. We have a lot of sweet girls.”

The Packers will now play at No. 2 Kasson-Mantorville (16-3 overall) in the Section 1AAA semifinals at 7 p.m. Friday. Since top-seeded Red Wing has already been ousted from the tournament due to a COVID-19 contact, the winner of K-M and Austin will host the Section 1AAA title game.

“We know them well, because they didn’t graduate anyone from last year,” Zoske said. “We’ve been prepping for them all year and we have an opportunity to go into their place and maybe get a little bit of redemption.”