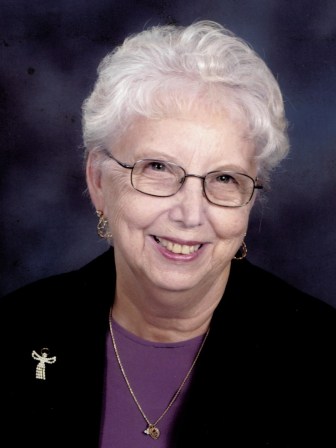 Dorothy was born February 27, 1933 at St. Olaf’s Hospital, Austin, MN to George Patrick Cochlin and Vera Almeda (Vollhart) Cochlin, who lived in Blooming Prairie, MN. Her early childhood was spent growing up as a spoiled little blond girl, the apple of her parent’s eyes. Dorothy contracted Polio at age 7, overcoming her illness with months of hospitals and therapy. During her childhood her parents moved to Portsmouth, VA then to Long Beach, CA; Rochester, MN and eventually to Austin, MN where Dorothy made many lifelong friends, graduating from St. Augustine High School in Austin, MN.

Dorothy was working at Shied Plumbing and Heating in Austin, when she met David Tunis Rockne at a party. Dave and Dorothy married in New Hampton, IA on April 18, 1953. Dave and Dorothy would move several times with Dave’s job at Northwestern Bell, eventually landing in Shakopee, Minnesota where they raised five children enjoying camping, fishing and outdoor activities.

Dorothy loved the community of Shakopee and was involved in many activities including Boys Scouts, Girl Scouts, Shakopee Jaycees and Shakopee Lions Club to name a few. She devoted many years as a stay at home mom and then began work at Sears Catalog Store in Shakopee, Sears Eden Prairie, MN as Personnel Assistant; Sears Burnsville, MN as Personnel Manager. Dorothy wanted to work closer to home and began work at Shakopee Public Schools as an Attendance Clerk, then to Assistant Superintendents Secretary at Shakopee Public School District Office, a job she found very rewarding. After her retirement she and Dave opened a small Telephone Repair Shop and Answering Service in Shakopee. Dorothy and Dave enjoyed many winters in Florida and at the cabin in northern Minnesota. Dave succumbed to cancer after a twelve-year battle on February 2, 2002.

In March of 2010 Dorothy met the next love of her life and husband Robert (Bob) Foster of Eden Prairie, MN. Their Courtship was short, and their love was strong. Dorothy and Bob had a lot of fun traveling locations in the United States and Europe and enjoyed their summers with family and friends at Bob’s family cabin in northern Minnesota. In March 2017 Dorothy and Bob would move to a home in Shakopee MN where Dorothy has many of her best memories of her later years living on Pinewood Drive.

Dorothy enjoyed embroidery, cooking, gardening and playing bridge with her circle of friends.

Dorothy is preceded in death by her parents, George and Vera Cochlin; and her husband of 49 years, David Rockne.

In lieu of flowers, memorials are preferred to the American Heart Association.