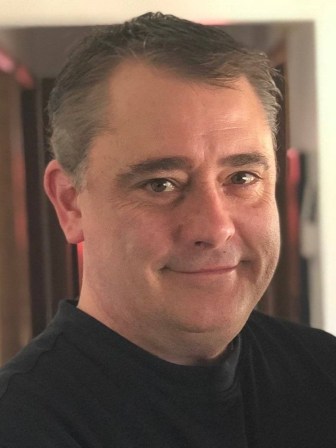 Deane Arnold Nelson, age 52, of Crystal, MN, passed away from complications of COVID-19 on Wednesday, March 10, 2021 at the family cabin in Motley, MN. Deane was born on December 2, 1968 in Austin, MN to Janet (Doggett) Nelson-Commers and Clifford Deane Nelson. He was a 1987 graduate of Austin High School.

Deane moved to the Twin Cities and welcomed the light of his life, Brittany Marie, on January 4, 1991 with his first wife, Ann Chrissinger. Deane worked in the service industry his entire life and was always the helpful smile that greeted customers as they sought a service or repair. Deane was a dedicated member of the team at Honest-1 Auto Care and most recently served as a Sales and Service Manager in New Hope, MN. Deane married the love of his life, Debra Ashton, on June 6, 2017. Deane and Debbie made their home in Crystal, MN. Deane loved cabin life and time with his family where he enjoyed boating, fishing, and a roaring campfire. He was an amazing cook and well-known grill-master. Deane was an avid Minnesota Vikings Football fan and wore his purple with pride. He was known and loved for his sense of humor especially his alter-ego, Deano Brown. Deane entertained at many a family gathering with dance moves rivaled by none. Deane is survived by his wife, Debra; his daughter, Brittany Plec (Matt); his step-children Deven Leidall (Michelle), Lisa Leidall (Taylor Evans), Aimee Carpenter (Ridge); his mother, Janet Nelson-Commers; his grandchildren, Autumn Plec, Allan and Halle Evans, Ashton and Noah Leidall, and Hannah Carpenter; his brothers Richard, Jack, and Joel Nelson (Barb); his sister Cathryn Quinn (Dan); his Aunt Janeth Ranum; his Uncle Ron Doggett (Jeanette); many nieces, nephews, and dear cousins. He is preceded in death by his father, Clifford D. Nelson and step-father, David Commers; his brother, Joseph Nelson; his grandparents Emil and Inez Doggett, Fayette Nelson and Merle Lewis. A funeral mass is being offered at St. Vincent de Paul Catholic Church in Brooklyn Park, MN on Tuesday, March 23 at 10:30 am, with visitation one hour prior to Mass. In lieu of flowers, a donation is appreciated to the Saint Therese Foundation, 1660 S. Hwy 100, Suite 103, St. Louis Park, MN or on-line https://donate.sttheresemn.org/. gearty-delmore.com 763-537-4511