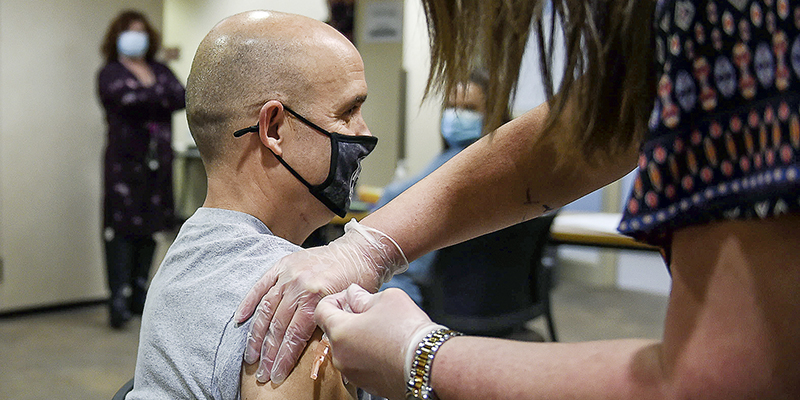 NEW YORK — The U.S. government’s first look at the real-world use of COVID-19 vaccines found their effectiveness was nearly as robust as it was in controlled studies.

The two vaccines available since December — Pfizer and Moderna — were highly effective at 90 percent after two doses, the Centers for Disease Control and Prevention reported Monday. In testing, the vaccines were about 95 percent effective in preventing COVID-19.

“This is very reassuring news,” said the CDC’s Mark Thompson, the study’s lead author. “We have a vaccine that’s working very well.”

The study is the government’s first assessment of how the shots have been working beyond the drugmakers’ initial experiments. Results can sometimes change when vaccines are used in larger, more diverse populations outside studies.

With nearly 4,000 participants from six states, the study focused on health care workers, first responders and other front-line workers who had first priority for the shots because they are at higher risk. They were given nasal swab test kits to use every week to check for signs of a coronavirus infection.

“The evidence base for (currently available) COVID-19 vaccines is already strong, and continues to mount ever higher with studies like this one,” said David Holtgrave, dean of the University at Albany’s School of Public Health, in an email.

The study included roughly 2,500 volunteers who had completed two vaccine doses, about 500 who got one dose and about 1,000 who did not get vaccinated between mid-December and mid-March.

The researchers counted 205 infections, with 161 of them in the unvaccinated group. Of the remaining 44, the CDC said 33 of them were in people apparently infected within two weeks of a shot. Experts say it takes two weeks before a dose takes full effect.

No one died, and only two were hospitalized. Thompson did not say whether the people hospitalized were vaccinated or not.

Besides the 90 percent figure for two doses, the study found it was 80 percent effective for participants two weeks or more after a first dose.

“Our national vaccination efforts are working,” she said during a White House press briefing Monday. She added that over 93 million Americans have received at least one vaccine dose and over 51 million people have been fully vaccinated.

Different researchers have tried to look at how the vaccines have performed in real-life conditions, including work done in Israel and the United Kingdom, and a U.S. study of Mayo Clinic patients.

Unlike the Mayo study, which focused on hospitalization and death, the CDC study looked for any infection — including infections that never resulted in symptoms, or were detected before people started feeling sick.

About two-thirds of the vaccinations in the study were Pfizer shots, one-third were Moderna and five people got the newest single-dose shot from Johnson & Johnson. The study was done in Miami; Duluth, Minnesota; Portland, Oregon; Temple, Texas; Salt Lake City; and Phoenix and other areas in Arizona.