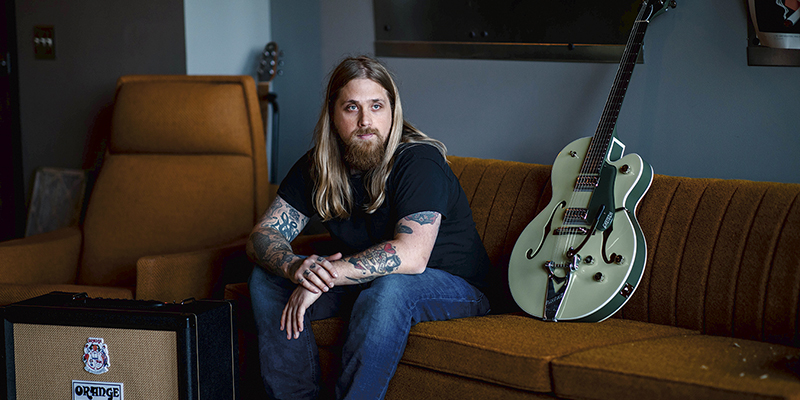 The band is back together. Joshua Whalen and the rest of the Whalen and the Willows is looking forward to a return to live music with a show this Saturday at the Paramount Theatre. Photo by Morgan Converse/Converse Candids

In December, Whalen and the Willows were looking forward to getting back on stage.

When the COVID-19 pandemic forced the world to seemingly come to a grinding halt in March, live music ended as well.

Musicians adapted the best they could, streaming performances from their homes or studios, but it just wasn’t the same — for musicians or fans.

But like in March, the Austin indie band once again had to turn off the amplifier, as Minnesota saw a severe spike in cases.

Now, that December show is slated for this Saturday and Joshua Whalen, the band’s founder, couldn’t be happier for the return to a stage.

“It feels real good,” Whalen said. “It’s a relief. Being away from the stage this long has been pretty hard. I just feel relieved that we can do something again. We’re feeling hopeful that things will get back on track and we can get back to playing shows.”

Those shows, while playing live, will be to reduced numbers. Just 100 tickets were on sale for the show on Saturday, with doors opening at 7 p.m. and the show slated to start at 7:30 p.m.

“It was like riding a bike … All of the work we did during the pandemic came through.” — Joshua Whalen. Photo by Morgan Converse/Converse Candids

The band, with opening act the Ripdoozers, sold out those tickets quickly.

“I’m hoping getting people back in the seats will show people how much live music really matters,” Whalen said.

The pandemic has been hard on musicians, who largely rely on playing live to develop and build a fan base.

And like many bands, Whalen and the Willows took a break from performing, but in some ways it wasn’t that bad.

“We just took a lot of personal time to improve our skills and our instruments,” Whalen said. “When we did finally get back together, you could tell everybody stepped up their game.”

During the time apart, Whalen himself found some time to work not only on music, but himself as well, using the time to find a center between music and the personal.

However, after so much time apart, Whalen had concerns what that sound would be like when they finally played together.

But the commitment of band members to Whalen and the Willows shone through, even from that first rehearsal back.

“I was wondering how that would go,” Whalen said. “It was like riding a bike. We got together, expecting things to be sloppy on some of the songs, but it was right on point, everybody was right on point. All of the work we did during the pandemic came through.”

Not only is the band looking forward to getting back on the stage, they are also preparing to record their second album. Their first album, “Peaceful,” was released in January of last year.

Now, over a year later they are preparing to reenter the studio at the end of this month, ready to record again with some lessons learned.

Nevertheless, the band is excited to once again be recording and they are heading into sessions with new ideas and new sounds.

“We’re really branching out,” Whalen said. “We’ve got some new sounds and we’re pushing a little more towards the indie rock vibe. We’re sticking to our roots, but definitely bringing new songs inspired by world rhythms and some 80s sounds.”

“We’re going to have fun with this record,” he added.

For the time being and fingers crossed, Whalen is hoping this is only the beginning for returning to the stage — not only for Whalen and the Willows, but for all musicians.

“I just hope getting out and playing live will get people reinvigorated with live music,” Whalen said. “We’ll be able to save the stages. Bring and experience and to move people. We want them to leave feeling inspired or feeling healed. Whatever is going on, that we can improve their lives in some way.”