All in and all out 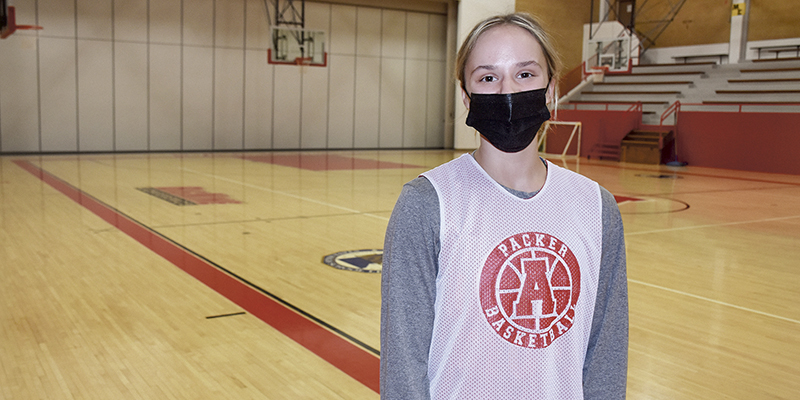 Austin senior Elyse Hebrink has excelled as a leader and a player for the Packers. Rocky Hulne/sports@austindailyherald.com

Austin senior Elyse Hebrink has never had much for quiet time in her life, but she’s fine with that.

Hebrink grew up in a full house as she was the sixth of seven children, but she quickly found her escape in the family tradition — basketball.

“It was always very chaotic, but good. It was busy,” Hebrink said. “I just remember after school my dad would pick me up and I would go to my mom’s basketball practices and all of my other siblings were there. I would just be running around.” 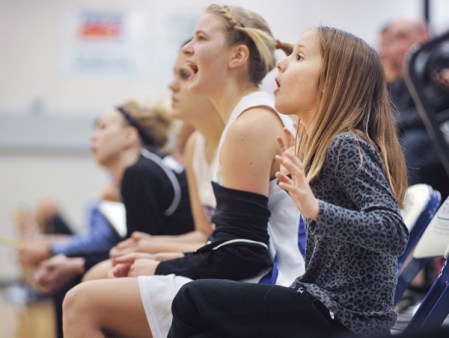 Elyse Hebrink, daughter of Riverland women’s basketball coach Suzy Hebrink, has a hard time containing herself during the second half in 2011 as the Blue Devils hosted the Gustavus Adolphus JV team in 2011. Hebrink has rarely been separated from the game she loves. Herald file photo

With her mom Suzy coaching the Riverland Community College women’s basketball teams and her older sisters Anna, Gretchen and Sophie eventually playing for the Blue Devils, Hebrink spent a good amount of her childhood on the bus with the team, on the bench next to her mom during games or in the gym at practice.

“I learned a lot. I feel like I gained a really good understanding of the game,” Hebrink said. “All of those Riverland players were like my older brothers and sisters and it was a lot of fun.”

Hebrink plans on playing for Riverland next season. She also has plans of playing at another college after that and eventually coaching basketball. She’s already working on her coaching certification at RCC.

Hebrink was brought up to the varsity team as an eighth-grader and she’s played just about every offensive and defensive position one can find at the high school level.

“It’s been a lot of fun to see our conference and sections kind of go in waves to being super competitive,” Hebrink said. “In my eighth grade year, it seemed like every team had at least one D1 player. As we got older, we were all super close and had high basketball IQs in Austin. That’s what led to the success we’ve had in the past few years.”

Austin’s Elyse Hebrink drives during the first half against Rochester Mayo in February. Herald file photo

Hebrink has sacrificed a lot of her offense for the Packers as she’s been the ultimate teammate. As the team’s lone senior, she’s way more pumped about making a pin-point pass or blocking a shot from a much taller opponent  than she is about scoring.

Austin head coach Eric Zoske said that Hebrink’s attitude has been contagious and he’s enjoyed coaching her for the last four years.

“She’s super easy to cheer for, because she’s undersized, even if she doesn’t know it or play like it. She brings energy and tenacity and she would’ve been one heck of a football player, but I’m glad she’s on our basketball team,” Zoske said. “It’s good for the younger players to see her play that way with no fear. I can talk about it as much as I want to, but it helps when one of your players demonstrates it.”

Hebrink said she learned that it pays off to be versatile when she played volleyball for the Packers, where they used her in a ‘utility’ role where she played various positions.

Hebrink also didn’t have to look far for role models as she’s learned a lot from her oldest sister Anna, who played college hoops at RCC and Bemidji State University as well as older brother Tate, who has played at RCC and University of Wisconsin-River Falls, currently plays for Valley City State.

Playing in a second state tournament is icing on the cake for Hebrink, especially after the season was in doubt for quite some time.

“We didn’t think we would get a chance to have a state tournament and nobody gets to play on their home floor to go to state like we did,” Hebrink said. “That was really special. This team is one of the best teams I’ve ever been a part of. We’re all really close off the court and we have a lot of fun.”