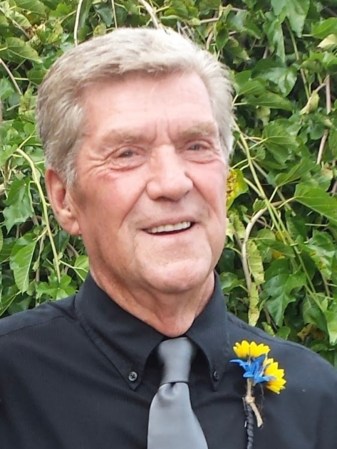 Wayne was born on March 20, 1941, to Allen and Bernice Paulson in Riceford, Minnesota. He was raised in Austin, MN, and graduated from Austin High School.

He was united in marriage to Ruth Neisen on February 17, 1962, at St. Augustine Church. They remained in Austin and raised three daughters.

Wayne had many accomplishments. He was a member of St. Edward’s Church where he participated in many of their activities, including the Christmas tree lot and Mardi-Gras. He was a member of the Knights of Columbus and the Eagles Club. In marrying the farmer’s daughter, he learned to farm, enjoyed helping fix machinery, and then moved out to the family farm in 1994. His joy on the farm was raising potbelly pigs, peacocks, llamas and the large pumpkins for his grandkids. He enjoyed running, he ran in several area races including the Austin Hog Jog. He also ran in Grandma’s Marathon where he finished in the top 1/3rd. He loved the competition. Some of his other hobbies included the bowling league, golfing, and of course his love of woodworking. The gorgeous woodwork around their home and the bird houses he has made for everyone will always be appreciated and remembered. He took great pride in his old 68 Firebird and 53 Buick Super that he restored.

He enjoyed several family vacations, taking his side by side out for rides, dogsledding, and Sunday afternoon motorcycle rides when he was younger. Nothing was more precious than spending time with his grandchildren at their school games, events, on the farm, or teasing them.

There was nothing he would not do for you. He was someone with a contagious smile, crazy sense of humor that always kept us laughing, and always wanted everyone to have a good time. We will forever be grateful for all he has taught us and all the wonderful times we shared together.

He is preceded in death by his parents, Allen Paulson and Bernice Paulson.

A celebration of life and 80th birthday party will be held at their family farm on March 20, 2021, from 1-4 PM. A private service will be held at Calvary Cemetery, later this spring.

The family requests memorials be made to the Austin Pacelli Cross Country team in his name.