Vikings turn the tables on Panthers 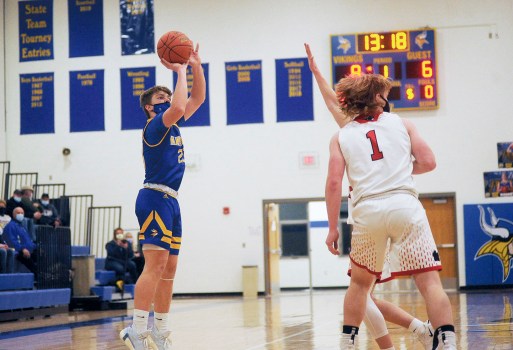 Ethan Pack knocks down a three-pointer for the Vikings. Rocky Hulne/sports@austindailyherald.com 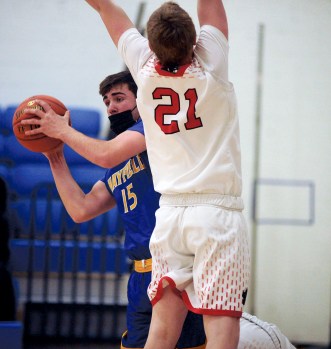 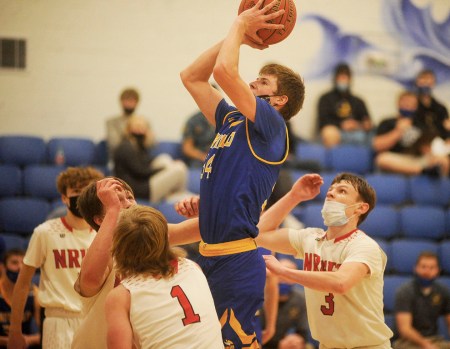 Hayfield’s Ethan Slaathaug fights up a shot amongst a crowd this season. Herald File Photo 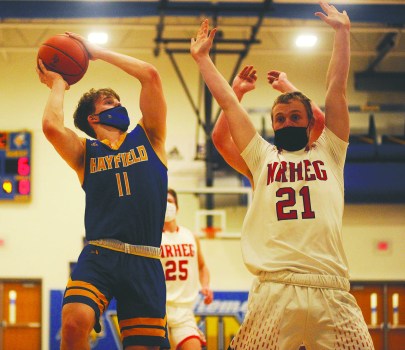 HAYFIELD — The Hayfield boys basketball team kicked into high gear to erase a slow start in a 69-48 win over New Richland-HEG in Hayfield Friday.

The Vikings put up just 22 points in the first 18 minutes of the game, but they came out on fire in the second half as they used a 23-2 run over five minutes to grab a 45-26 lead.

Hayfield head coach Chris Pack said the Vikings had to start moving the ball to get it going and the team was much more active in the second half.

Hayfield (7-3 overall, 6-2 Gopher) seized momentum early in the second half after Easton Fritcher took a charge. Fritcher logged in a double-double with 18 points and 11 rebounds and he was effective around the rim as he laid in three lob passes for scores.

“That charge got us going on a run and we started hitting some shots. Ethan (Slaathaug) hit a big three and we started getting some lay-ups,” Fritcher said. “We’ve still got work to do this year. We like to start off a little cold. The big thing for us is to get a big play right away and use that for the next 34 minutes.”

Slaathaug continued to light up the scoreboard for Hayfield as he piled up 28 points, four rebounds and three assists. Most of his damage was in the paint and it came off of an offense that became active in a flash.

“When someone makes a hard nosed play like taking a charge, that puts a spark in every one of us. The energy level always has to be high for us to do well,” Slaathaug said. “Scoring 22 points in one half is not usually us. Normally, we’re moving the ball around and getting everybody involved, but we were all kind of slow and not moving around enough in the first half.”

The Panthers (3-6 overall, 3-4 Gopher) had won two in a row before Friday’s game and they played solid in the first half as they scored the last seven points before the break.

Hayfield, which has won six of its last seven, is now at the halfway point of the season and Slaathaug thinks the Vikings are just getting started.

“If all of us are included, it helps a lot,” he said. “We have some guys who are still getting used to varsity and I think we’re going to be really good down the stretch.”

“Ethan has hit at least two threes in his last four games,” Chris Pack said. “You can tell he’s getting more comfortable with every game and Lucas gave us good minutes tonight. We’re starting to get there.” 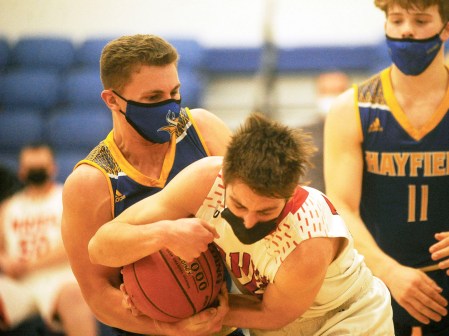