Triple Threat: Viking freshmen have learned on the run 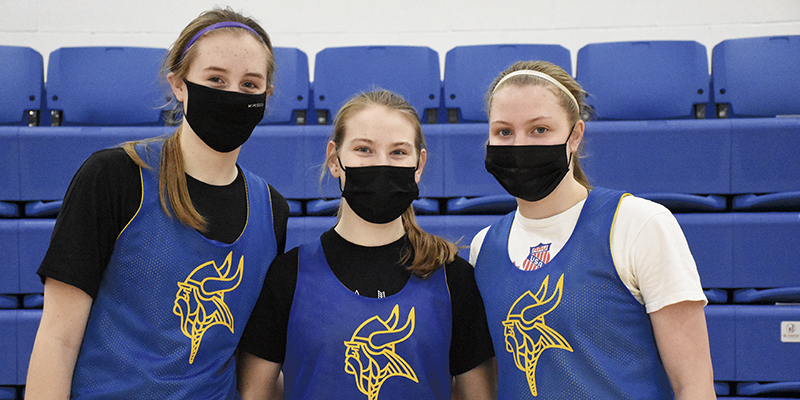 From left, Hayfeidl freshmen Natlie Beaver, Kirsten Watson and Chelsea Christopherson have all stepped up to carry the scoring load for the Vikings this season. Rocky Hulne/sports@austindailyherald.com

HAYFIELD — Hayfield freshman Kristen Watson isn’t old enough to drive a motor vehicle yet, but put a basketball in her hand and she’s quite capable of driving to the hoop and making something happen for the Viking girls basketball team.

Watson has emerged as Hayfield’s top playmaker and she’s part of a Viking youth movement that includes fellow freshmen Natalie Beaver and Chelsea Christopherson. All three have produced big minutes and big plays for a Hayfield team that is on the rise.

Watson, who moved to Hayfield from Byron when she was in seventh grade, was Hayfield’s starting point guard last season, but she’s taken her game to new heights this year, averaging 15.9 points, 3.9 rebounds, 3.7 steals and 2.8 assists per game. She is the main holdover from last year’s team that graduated seven seniors. 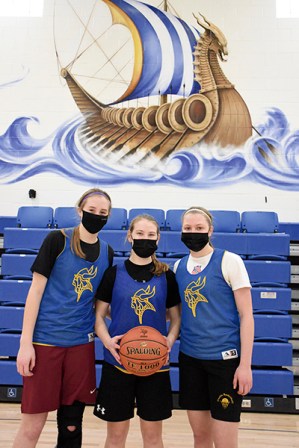 From left, Hayfield freshmen Natalie Beaver, Kristen Watson and Chelsea Christopherson have all stepped up for the Vikings this season. Rocky Hulne/sports@austindailyherald.com

“It’s a lot different without all of the seniors we had last year, but these girls push us really hard in practice, especially on the bench; they’re really loud and they cheer loud for us,” Watson said. “I think we’ll be really good in the next couple of years.”

Beaver played off the bench for the varsity team last season, and now she’s emerged as a sharp shooting threat, who can also get into the paint. She’s averaging 15.3 points, 5.4 rebounds, 2.2 blocks, 1.9 steals and 1.5 assists per contest.

Beaver said the team’s older players have helped lead the way and made her feel more comfortable with a big role on varsity.

Christopherson brings strength to the team and she’s steadily improving on the court. On the year, she’s giving Hayfield 4.2 points, 3.1 rebounds, 1.2 steals and 1.0 assists per game.

Christopherson has played with Beaver since the pair were fourth graders and those two teamed up with Watson to put together a very successful season as seventh graders. All three players have embraced the jump to the big stage and nerves haven’t been a factor this year.

“It’s been interesting,” Christopherson said. “I definitely couldn’t have done this without my teammates and working hard during practices. I feel like we work well together.”

Hayfield head coach Kasey Krekling let Watson learn on the fly last season and the rest of the team has followed suit. While they still lean on the upperclassmen for leadership, the three freshmen, who all play AAU basketball in the summer, are learning what it takes to win games against good teams.

“All three of them have put in the time in the offseason. You don’t get any better without putting in the time, it’s not going to just happen. They made it happen,” Krekling said. “It’s a learning curve for everyone, but they’ve really stepped up their game. We were hoping for good seasons for them and they’ve surpassed what we were hoping for.”

All three of Hayfield’s losses – which came against Section 1A contenders Blooming Prairie and Kingsland and Class AA power Waterville-Elysian-Morristown – were close games at halftime. The losses to BP and Kingsland were both close until the final whistle.

The freshmen trio, who are as competitive as they come, said the Vikings (10-3 overall) simply need to put together a complete game to compete with the top teams in Section 1A when the tournament begins on March 15.

“The good teams we are playing are a lot more physical than us. We just need to come out and box out and do our job,” Watson said. “We want to beat the teams that we lost to earlier in the season.”