The more things change … The more they stay the same 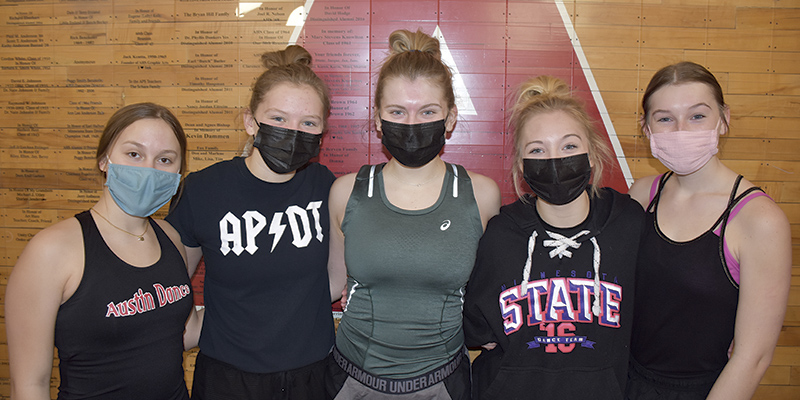 Austin dance team captains, from left: Allie Hughson, Briella Wempner, Grace Bobby, Paige Leiberg and Meredith Murphy are all set to compete in the Big Nine Meet in Packer Gym this Saturday. The Packers have found a way to stay motivated as they’ve gone through a season with masks, distancing and small crowds. Rocky Hulne/sports@austindailyherald.com

It has been almost exactly one year since the Austin Packer Dance Team took third place in high kick and 11th in jazz at its 18th consecutive Minnesota State Dance Meet appearance.

A lot has changed since that day.

The Packers have learned a new meaning of patience, they’ve been forced to become self driven and they’ve conquered the art of dancing in masks. One thing that hasn’t changed is the team’s competitive edge, which will be on full display when the Packers host the Big Nine Meet in Packer Gym at 10 a.m. Saturday.

“It’s this crazy year and now we get to dance on our own floor,” Austin captain Allie Hughson said. “We’ve learned a new strength by finding out how strong we actually are and our team connection has grown stronger.”

Austin was supposed to host the Big Nine meet last season, but it was moved to a different location after a blizzard hit and changed the date. The Packers will now get the chance to host a rare home meet in a year that has seen them perform in front of small crowds with fewer teams in attendance.

Besides the conference competition, the Packers can also focus their energy on getting back to the state meet, which is scheduled for March 12-13. That meet has served as a beacon during a dark time for all dancers in Minnesota.

The Packers spent the shutdown part of the season in November and December holding virtual practices for a season that they weren’t even sure was going to happen, but that hard work has paid off for them this winter.

“It’s been different, but we’ve always learned how to adjust to everything that happens,” Austin captain Paige Leiberg said. “We know we have a state meet, which we were always working for. Now we know for sure that we have to put in all of the effort we do every year to get to where at we want to be.”

While they will only have a handful of Packer fans in front of them on Saturday, hosting the Big Nine meet will serve as a reward for an Austin team that has grown accustomed to shouting out names of teammates or yelling out encouragment during competitions.

“Being at home is something that we’ve never experienced before. It will give us a whole new level of comfort and much more energy. We’ll be able to feel comfortable and just kill it,” Austin captain Briella Wempner said. “This year has definitely been a challenge, but we’ve grown a lot and we’ve been able to see our full potential by facing the challenges. It’s something you could perceive as a negative, but we’ve been able to grow past it.”

Austin captain Grace Bobby said it’s been a little more difficult to bond with the team when get-togethers like pasta parties haven’t been allowed, but the Packers have found ways to stay connected virtually and in practice.

She added that all of the changes never affected the team’s attitude.

“We came in ready to work and we wanted it from the start,” Bobby said.

Simply having dance season has been an uplifting experience for the Packers as the team has been able to get together and compete during a time of uncertainty.

“I don’t know what I would do without a dance season,” Austin captain Meredith Murphy said. “I’m just glad we have it.”