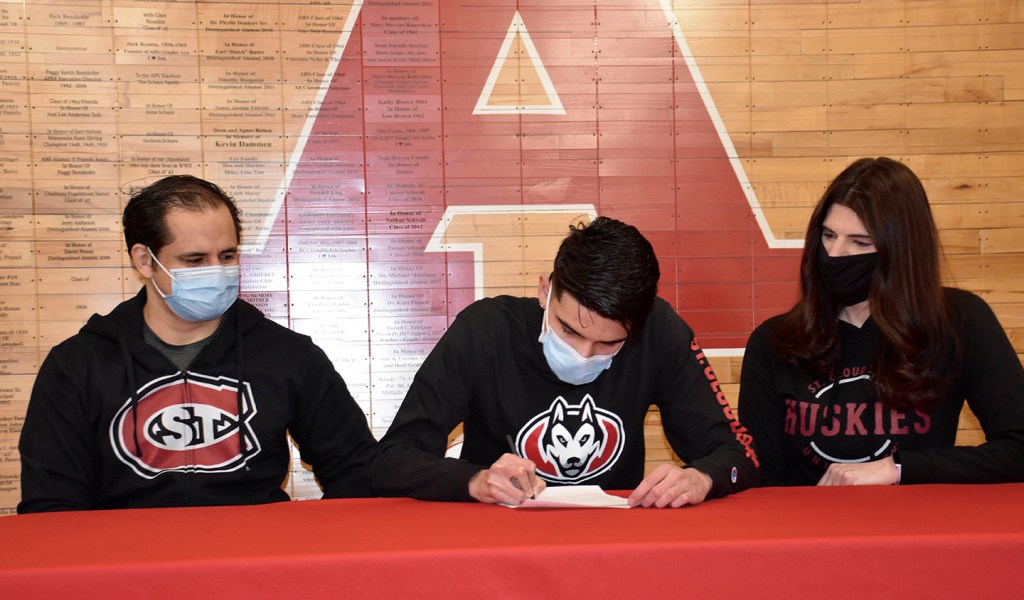 Austin senior Andres Garcia didn’t get to play as many soccer games as he would’ve liked to this past fall, but he sure turned some heads when he was on the field.

Garcia scored a state-leading 32 goals in just 14 games and that play offered him the opportunity to become Austin’s first Division II soccer player in program history. Garcia cashed in when he signed his national letter-of-intent to play for the St. Cloud State University Huskies at Austin High School Monday.

Garcia is certain it won’t be long before another Packer matches his feet.

“It’s a blessing for me and I could see my teammate Henry (Tolbert) doing this for sure,” Garcia said. “Also, I’ll be the first in the fam to do this until my little brother Aidan comes up and does it too.”

Austin’s Andres Garcia gears up for a shot in the first half against PI-ZM in the team’s semifinal matchup at Art Hass Stadium. Herald File Photo

Garcia will be a part of St. Cloud State’s second ever men’s soccer season as the school dropped football and added soccer last year. The Huskies are coached by former Drake University head coach Sean Holmes and they will begin their inaugural season on Feb. 25, with the intent of playing in the fall next school year.

Garcia is expecting to play midfield for the Huskies.

“I’m just happy to be there and I’ll do what’s best for the team,” he said. “I feel like them being a new program makes it better. I’m going to try and go there and set the standards high and see what I can do to help them.”

The COVID-19 pandemic limited recruiting for all athletes this year. Garcia was only able to have a couple of in-person visits with the school and was able to watch one training session.

Garcia was brought up to the Packer varsity team as a sophomore and Austin won Section 1A titles and Big Nine titles in all three of those seasons. He improved with each season and that success came from the time he put in throughout the year.

“Every year I kept working, even outside of fall,” Garcia said. “When last summer’s season was cancelled, we got a bunch of guys together to keep working out so we weren’t missing out on anything.”

The Packers 13-0-1 overall record this fall made them the only undefeated team in Austin history. While there was no state tournament awaiting Austin after it beat Dover-Eyota a 2-1 shootout in the Section 1A title game, the team was happy it had a chance to prove its worth.

“Our team was so good,” Garcia said. “All of us wish we would’ve had a state tournament, but we’re all glad that we at least had a season and we were able to win the Big Nine and the section title.”