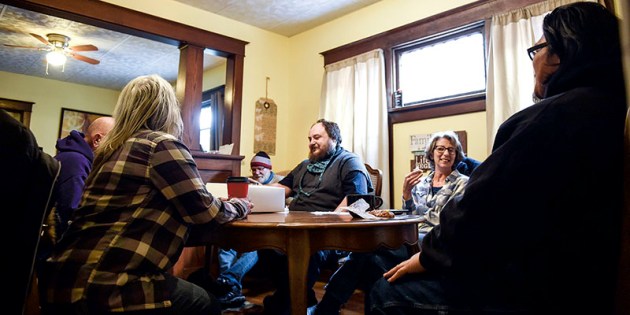 Those attending Coffee Connections Friday morning share a lighter moment before the start of the meeting. Eric Johnson/photodesk@austindailyherald.com 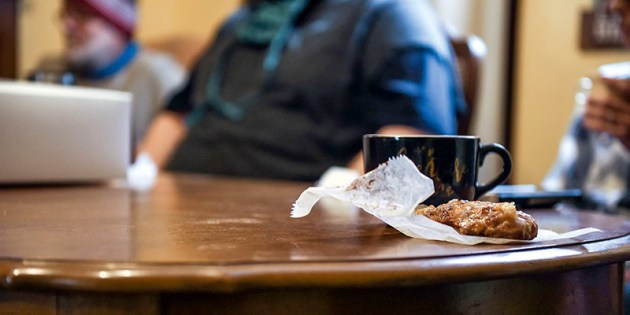 Donuts, Coffee and fellowship lay the groundwork of Coffee Connections and its informal support network for recovering addicts. Eric Johnson/photodesk@austindailyherald.com 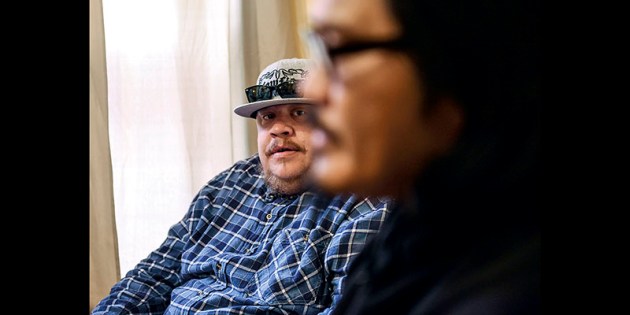 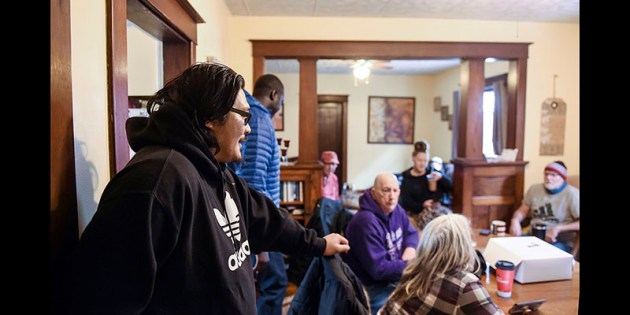 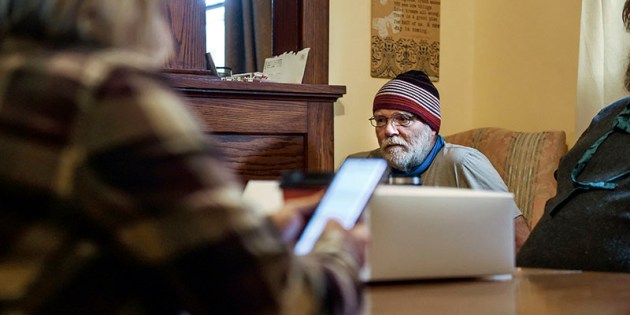 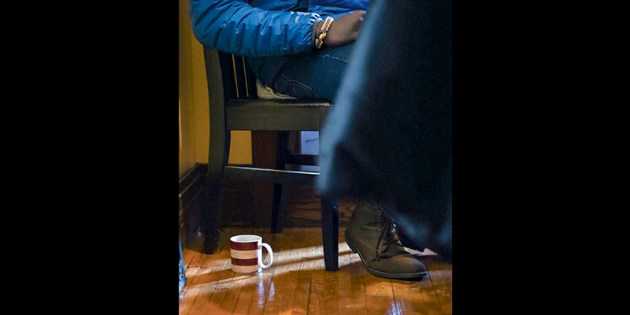 A cup of coffee sits next to a participant in Coffee Connections Friday morning. Eric Johnson/photodesk@austindailyherald.com 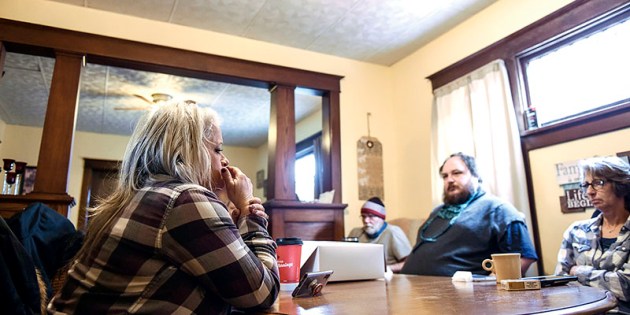 Melissa Rebultan pauses as she tells her story during a meetingof Coffee Connections Friday morning. Groups like Coffee Connections provide a needed grounding and support from others in recovery. It has become especially important during the COVID-19 pandemic when these types of support become more challenging to find. Photos by Eric Johnson/photodesk@austindailyherald.com 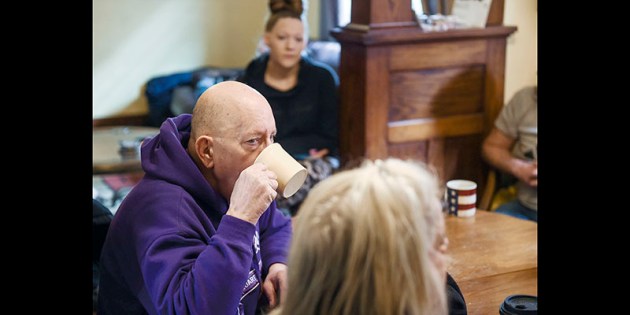 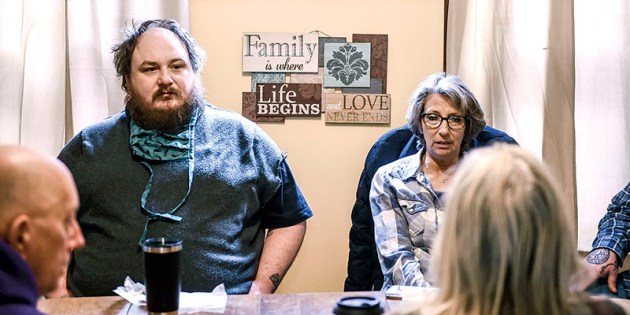 Signs hanging in the dining room of the Men’s Sober House reflect the support of groups like Coffee Connections, which as moved to meeting at the location because of COVID-19 restrictions. Eric Johnson/photodesk@austindailyherald.com

When the COVID-19 pandemic began last March in Mower County, government buildings either shut down completely or operated with limited capacity and services. As a result, Mower County Corrections had to cease offering in-house programs designed to help recovering addicts with overcoming substance abuse.

“When the pandemic first came on, we sent everybody home,” said Steve King, director of Correctional Services. “We have a lot of in-house programming with regard to chemical dependency. We have these classes internally and when I met with some of the folks I work with, I said, ‘We have to shut it down for all of the in-house programming because no one can be in the building. We can’t do office visits; they have to be virtual or by phone for a bit.’”

When it comes to low-level drug offenses, the State of Minnesota has a probation-centric approach with an emphasis on recovery.

The decision to close meant that while one-on-one yard visits were possible, recovering addicts on probation could not meet with their probation officers or get a urinalysis, requirements that were held at the Correctional Services’ office. On top of that, the Mower County Jail has to be cautious as to who can be admitted due to spacing issues at the jail, prompting law enforcement to bring in suspects only if there is a public safety concern.

As a result, there is uncertainty as to how many recovering addicts may have relapsed since the pandemic started.

“We don’t know the half of it probably,” King said. “The counties that have drug courts have said that without drug courts and without active support, these folks have slipped. There has probably been a good amount of relapse out there.”

“I think we know less about relapses because people are not being tested as much through probation because of COVID,” said Austin Police Det. Mark Walski, who works with the Southeast Minnesota Violent Crimes Enforcement Team. “We don’t know 100 percent if someone is relapsing. We hear rumors that they are, but due to COVID they’re not coming into the office anymore, so it’s difficult to know if they’re relapsing or if it’s rumors.”

In the meantime, law enforcement is trying to find other means of making sure addicts on probation don’t relapse.

But another concern is the pandemic’s effect on recovery programs. According to Jeremy Johannsen and Elbert Trias, both former addicts themselves, the pandemic has caused a lot of addicts to become isolated, a factor that can lead to relapse.

“We’re used to doing one-on-one meetings and being with people,” said Johannsen, a peer recovery specialist with Recovery is Happening. “When we got cut off or are doing Zoom meetings, there’s a lot more isolation and that, when you’re a new timer, is no good. You see people that you would normally pick up for meetings or talk to regularly at the meetings who are suddenly out of the picture. Sometimes it’s already too late because they’re already back out there and their mind is set.”

“There are a lot of people who isolate,” Trias said. “For a newcomer, isolation is bad. Even for myself, being in recovery for four years and three months, isolation is a big problem. These people need to be out there and need to support and help each other, but if you’re staying in because the governor said that you can’t have more than 5 or 10 people in your building, what are people going to do? Our method is to not turn an addict away, but if we have to turn an addict away because there’s a pandemic, then there’s an issue.”

Trias, who hosts the weekly Coffee Connections program for recovering addicts, said that he used to see 45 people at the meeting every week. Now he usually sees about 10 participants.

“It’s just better when you have person-to-person contact,” he said. “It shows support and encourages that person to go out and try to be in recovery. People seek people to get that support and if you’re stuck at home behind a computer, there’s no real bond to it.”

“Helping out people is pretty much the bread and butter to stay sober,” Johannsen said, “The most important person at a meeting is the newcomer. If I wouldn’t have been befriended by the people who had more time in recovery and gotten to know them, there’s no way I would have made it.”

But the programs are not just for getting addicts to connect with those who understand their struggle. It’s also an opportunity for them to participate in activities, such as bowling, biking, camping and playing cards.

“There are other ways to have fun other than being drunk or high, and if we can show these people how to do it, something will click,” Trias said. “The more they see it, the more they’re involved with it, the more they’ll want it. You can’t get that on a computer.”

Despite the pandemic, efforts are still being made to assist those in need of treatment.

“From the law enforcement side of it, we do keep in touch with people,” Walski said. “We try to get a hold of them and get them into treatment and show some support. We as cops with the Task Force have driven people to treatment. We’ve filled up gas tanks in cars when they say they can’t get to treatment in South Dakota; we’ll meet them at the gas station and pay for their gas. We’ll make contact with them and let them know that we know they’re using and that if they want help, they can call us and we’ll point them in the right direction.”

Johannsen said he has an idea for acquiring a short bus, what he would call the “Meeting Maker,” that would be used to transport addicts to meetings in southern Minnesota if they have no way to get to them. It’s an idea he believes many communities would embrace.

“In my field, there are a lot of people in the Sober House who are not from Austin,” Johannsen said. “Say if someone’s from Mankato, then we’re going to take them to meetings in Mankato. He’s going to develop relationships up there so when he does move back home, he’s not going to be flying blind; he’s going to have numbers and he’s going to have contacts.”

“I cook a meal or have something there,” he said. “There’s always hot coffee and something to eat. Anybody is welcome no matter what’s going on. There is always someone there every Friday morning at 9 a.m. to give support and help.”

“The good thing about the Coffee Connections is that probation officers are welcome,” Johannsen said. “People on the addict side and the professional side can see the humanity in each other.”

“They can see both lives,” Trias added. “It’s not about sending them back to jail; it’s about getting them help.”

Those seeking support can also visit the Men’s Sober House, according to Johannsen.

“Anybody struggling can always go to the Men’s Sober House and say if they need help,” he said. “The guys there will sit them down, get them a cup of coffee, and if they need more help, they can call me and I’ll get them the help they need.”

For those in need of treatment, Recovery is Happening can be reached at 507-218-4773 and services Dodge, Freeborn, Mower, Olmsted and Steele Counties.

“Recovering is Happening in Rochester is amazing,” Walski said. “Say a heroin user comes to us and says, ‘I want to go to treatment now.’ Some places don’t let him get in for an assessment for another week. If you call Recovery is Happening, they’ll meet with him tomorrow.”

Walski said that anyone looking for help can contact the Austin Police Department at 507-437-9407 and ask to speak to him.

“If people want treatment and don’t know where to get started, they can contact me or family can contact me and I’ll point you in the right direction,” he said. “We’re a resource for information and we will talk to anybody and everybody who needs help. We’d rather make a case on somebody who wants treatment and get them into treatment. It’s a lot more work getting a criminal case put on somebody, so we’d rather help them.”

“I’m willing to help anybody who wants it,” he said. “You just have to be honest with yourself, open-minded and willing to do whatever it takes to stay clean.”

“There comes a point where those who are on probation won’t be on probation,” King said. “This is one of those tests where you’re going to have to take the tools you’ve been given and be successful, or you’re going to have to make choices about using again. It’s up to them and is kind of a precursor of what’s to come once they’re off supervision. We sure do like to provide that support and be there for people, but this is an unusual time.”