Packers pressure their way to win over Huskies 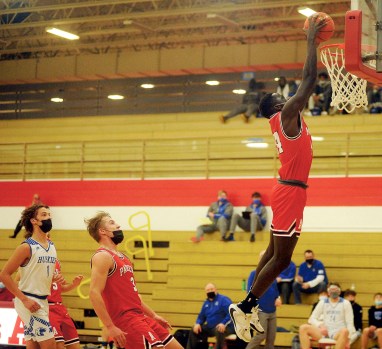 Victor Idris goes up for a two-handed jam off a pass from Gage Manahan in Packer Gym Monday. Rocky Hulne/sports@austindailyherald.com 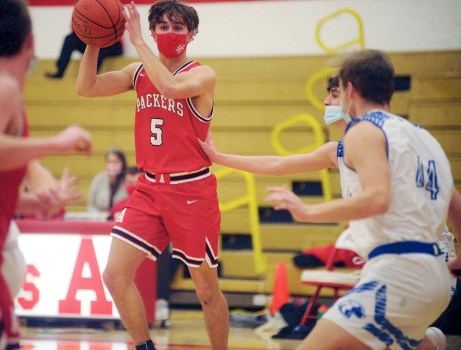 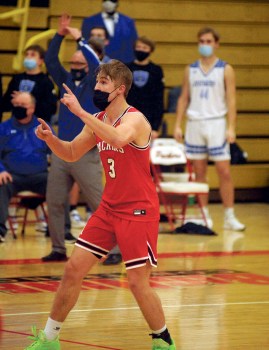 Austin senior Teyghan Hovland points to the scoreboard after knocking down the go-ahead three-pointer against Owatonna in Packer Gym Monday. Rocky Hulne/sports@austindailyherald.com 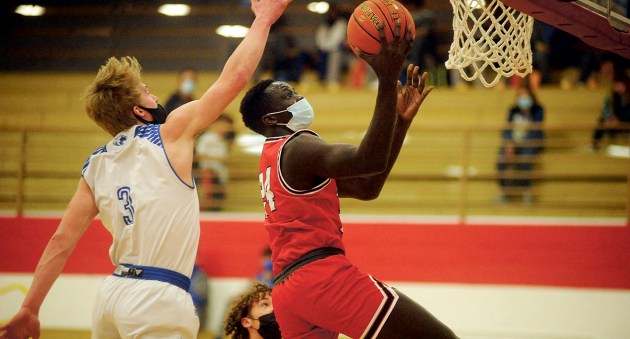 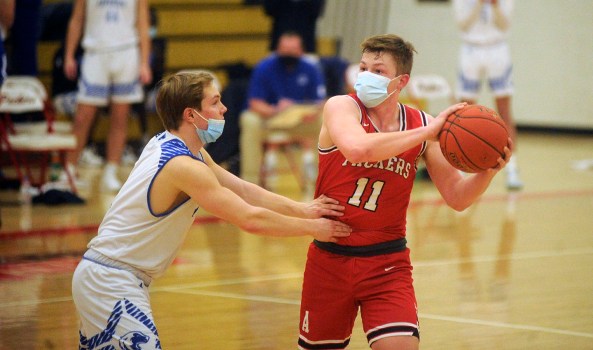 Gage Manahan holds onto the ball for the Packers. Rocky Hulne/sports@austindailhyherald.com

The Packers turned the last minute of the game into a practice of chaotic cooperation as they found a way to beat Owatonna 52-49 in Packer Gym Monday night.

Teyghan Hovland was supposed to cut and look for a back screen on Austin’s final possession, but he stayed put at the wing, where he knocked down the game winning three-pointer with just a shade over three seconds remaining. Hovland’s three came on a dish from Emmanuel Manyuon.

Hovland also converted a lay-up that put Austin up 48-44 with 2:40 left in the game. He finished with 15 points, three rebounds and three assists.

“This was a great win, especially for the guys who were on last year’s team,” Hovland said. “We lost to them on senior night last year, and that wasn’t good. To come in tonight and beat those suckers, felt real good.”

Victor Idris hit one of two free throws to tie the game up at 49 with 21 seconds left, but  the Packers still had five fouls to give. Austin used four of those fouls, and it finally forced a turnover when Gage Manahan forced a ball out of bounds off of Owatonna with 12 seconds left in the game.

“If we fouled them so be it. I was just hoping we would get a steal,” Austin head coach Kris Fadness said. “We did what we were afforded to do and I thought Gage did a good job on that kid. He got him down on the corner and got him stuck down there.”

Okey missed all of his three point attempts in the first half before making three straight down the stretch. He finished with nine points and three steals.

“I think it was more confidence. In the first half we didn’t have the confidence that we needed, but at halftime Fads told us just to shoot and that helped,” Okey said. “Our chemistry is getting better every game.”

The Huskies (7-1 overall, 7-1 Big Nine) used a 10-2 run to go up 10-4 early in the game and held that lead for the entire first half. The Packers pulled to within 34-32 when Hovland hit a three on a pass from Manahan, but the Huskies bounced back to score the next six points.

“We had three turnovers in a row and that can’t happen. We’ve got to get better in those situations,” Fadness said. “Overall, I’m happy with our guys. Owatonna’s a very good team and they’re a preseason conference favorite. In the first half, we were really bad offensively and we’re going to have to change some things. You just get caught running around the three-point line, standing a lot and doing a lot of dribbling.”

Idris put up 11 points, 10 rebounds, six assists and two blocks for Austin. He had a thundering two-handed jam on alley-oop off the backboard from Manahan in the first half.