Packer backcourt is on the rise 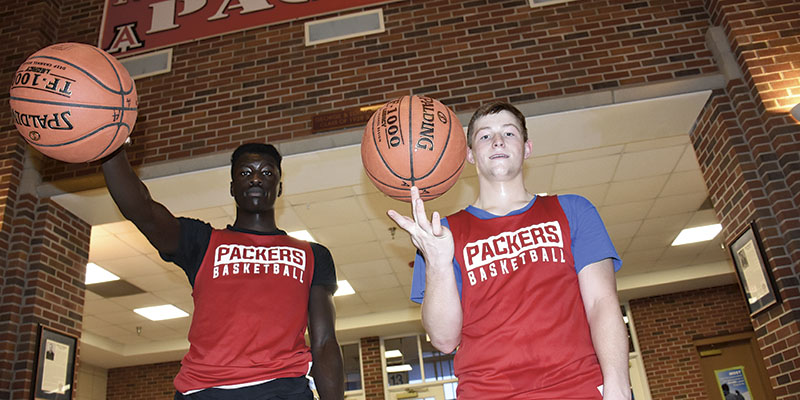 Austin juniors Emmanuel Manyuon, left, and Gage Manahan have each given the Packers a big boost in the backcourt this season. Rocky Hulne/sports@austindailyherald.com

Austin juniors Gage Manahan and Emmanuel Manyuon may be turning heads in the Big Nine this season, but the Packers backcourt tandem didn’t come out of nowhere.

They came from spending hours in the gym and long minutes on the junior varsity roster last winter, seeing very little time on the varsity team.

Now they are helping the Packers (5-1 overall) control the pace as Manyuon has emerged as a go-to scorer and Manahan is a gritty defender who is learning to run the offense.

Manahan is just 5-foot, 8-inches tall, but the strength he has gained as a two-way starter for the Austin football team has helped on the basketball court, where he is averaging seven points, 4.7 assists, three rebounds and 1.8 steals per game.

“I worked with a lot of guys last year that were better and older than me. Working with them and getting better with them made me patient,” Manahan said. “It’s all about thinking you’re bigger. It doesn’t matter if it’s true, as long as you’ve got that mentality. Nobody expects me to be able to jump and get the ball, but I can get there.

At 6-1, Manyuon can rise well above the rim to finish, go around just about any defender and can pull up three-point land. When asked if Manahan can check him, he smiled and said “no.” When asked if anyone can guard him, he smiles and says “of course not.”

Manyuon’s confidence is backed up by his play. He is averaging 22.4 points, 3.4 rebounds, 1.4 assists and 2.8 steals per game. The Packers are 5-0 when he is on the floor, and he is a matchup nightmare for any defender trying to slow him down.

“Emmanuel’s just a scorer. There’s no other way to put it,” Austin head coach Kris Fadness said. “He puts the ball in the basket. He still has more upside. He’s a shot maker, but he’s got a long way to go defensively and once he starts turning defense into offense, that will enhance his game even more.”

Manyuon is the younger brother of 2015 Austin grad Mark Manyuon and he’s already emerging as a bigger playmaker than his older brother.

“Time flies. It’s crazy. It seems like just yesterday I was watching him play,” Manyuon said. “I’ve just been getting in the gym every day. I knew my time was coming (last year) and I didn’t want to rush anything.”

Manyuon and Manahan have been teammates for four years and they’ve already developed a sense of where the other will be on the court. While Manyuon does a lot of the scoring, Manahan has been valuable to the Packers in other ways as he is developing into a true point guard.

“Gage has gotten so much stronger than he was last year and his ball handling has improved. We want him to become more of a leader and get more vocal,” Fadness said. “He’s gotten huge rebounds for us. He’s an athlete, he gets off his feet and he’s a little bit of a bulldog. He’s got a lot of fight in him and a lot of competitiveness in him. Defensively he’s been a ball hawk up top for us.”

This season hasn’t been ideal with masks, small crowds and social distancing, but the Packers have found ways to stay motivated and energized on game nights.

“It comes from our bench,” Manahan said. “We come out of the locker room and everyone’s hyping us up. We have to go out and play with intensity, especially on defense.”

Manyuon and Manahan are both brimming with confidence and they both have a strong desire to win games. They fit right in with a Packer program that has come to expect excellence in the past 10 years.

“You’d rather have kids that are overconfident than not confident,” Fadness said. “It’s nice that they believe in themselves, we’ve just got to harness some of it.”