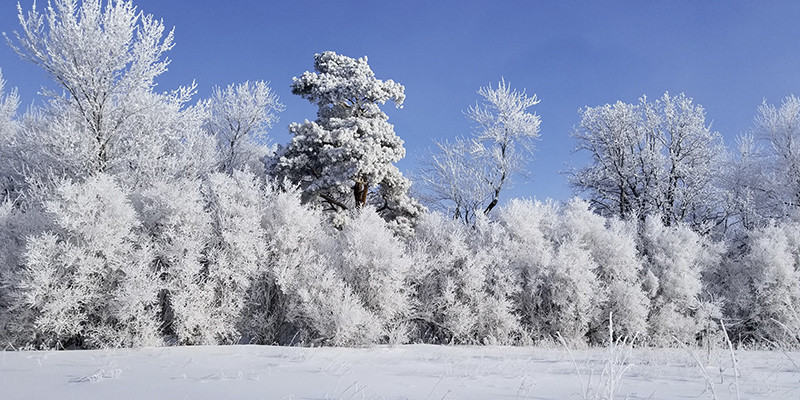 Each winter, Mother Nature delivers an extensive blanket of snow across North America. As Minnesotans we know that snow can elicit a wide range of emotions. Snow can be magical, awe inspiring, hazardous or a nuisance.  We have developed a culture of hundreds of thousands of winter enthusiasts who like to downhill or cross country ski, snowshoe, snowmobile, ice fish, sled and more. Many Minnesotans live for the cold season to truly enjoy these outdoor activities.

Here are some “chillin’ facts” about snow.

Snow isn’t white. Technically snow is translucent. It is a fact that when snowflakes are examined under a microscope they are clear. As Sarah Stone explains for Gizmodo (gizmodo.com): “So when one of these tiny, beautiful ice crystal formations bend light, that light ultimately encounters another ice crystal in the clump of snowflakes where it is also bent, and then another and another … light waves will ultimately be reflected and thus the sunlight will appear white to you.”

An example of graupel, snowflakes that have gathered into small pellets.

Snow can sometimes appear blue or pink. “When Elvis Presley sang a song about having a “Blue Christmas” he could have been literal.  Snow can appear blue to the naked eye, for reasons similar to why it appears white (bending light). But in cases where the light penetrates deeper into the snow, more red light might get absorbed than blue light.  In polar and alpine regions that contain algae with a red pigment, snow can take on a pink appearance.”

What you think is a snowflake isn’t a snowflake. “The classic image of snowflake with its star shape and six arms, is actually a snow crystal. Snowflakes can be a wider range of crystal formations, from a single crystal to a small cluster what Kenneth G. Libbrecht, a snowflake devotee at the California Institute of Technology calls monster snowflakes, resulting from when crystals collide in midair and stick together to form flimsy puffballs. But a snow crystal is the tiny thing that forms when water molecules align hexagonally and freeze together.” Each snowflake is made up of 200 ice crystals. Snowflakes always have six sides.”

Snow crystals can take three other forms of crystals. “Hoarfrost are deposits of frozen water that create clear furry looking” frost on steroids.”(Weather.com-hoarfrost explained). Hoarfrost sticks on poles, wires, fences, trees and plants and can create beautiful winter landscapes. There’s graupel, which consists of snowflakes that have become rounded pellets as large as 5 millimeters. Sometimes, graupel is mistaken for hail.  The third form is called polycrystals which are snowflakes made up of numerous individual ice crystals. These are the large ones you might see during storms that make you say “Wow, these are such large snowflakes!”

Though supporting evidence is limited, the Guinness World Records book lists the largest snowflake on record to be one from a January 1887 storm in Fort Keogh, Montana.  Measuring 15 inches wide, the rancher than spotted it described it as “larger than milk pans.”

Identical snowflakes do exist. “Despite the adage that no two snowflakes are alike, it is a fact that identical snowflakes have been found.  In 1988, scientist, Nancy Knight of the National Center for Atmosphere Research in Boulder, Colorado, found a pair of identical flakes resulting from a storm in Wisconsin. Each snowflake contains approximately 180 million water molecules coming together in a random way.” We get close to 80 percent of the world’s fresh water from snow and ice!

Billions of snowflakes fall in every snowstorm. “On the average snowflakes fall from the sky at 3-4 miles an hour. While snowflakes are falling, they are continually being changed by hitting other snowflakes on the way down, by the wind breaking off part of fragile snowflakes, by a sudden jar when snowflakes are hitting the ground, and by snowflakes falling on top of another. A lot of air is trapped inside the ice crystals making up a snow flake, which is the reason snowflakes are extremely good insulators. It has been recorded that ground covered with two feet of snow was 50 degrees warmer than the air immediately above the snow pack. So, when talking about a blanket of snow, we really mean a blanket.”

So the next time you curl up with a blanket this winter to ward off the cold, think about Mother Nature’s ability to provide a snow blanket too.

• Ski and snowshoe rental is currently ongoing. Reservations can be made online. www.hormelnaturecenter.org/skirental