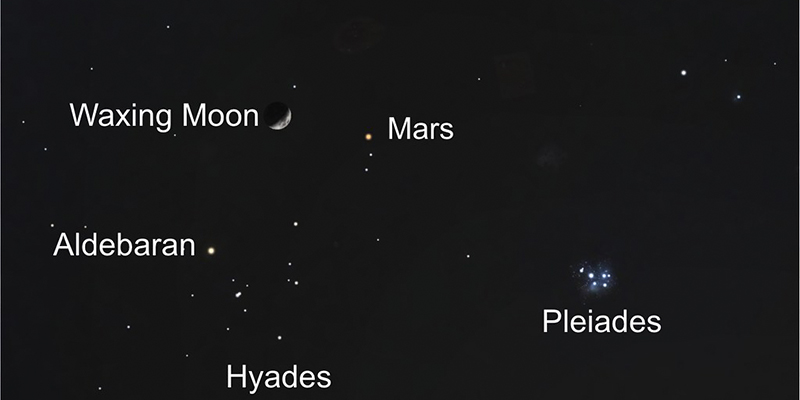 Winter may seem endless by the time March rolls around, but this month the sun and the day length are both climbing at top speed.

At our northern latitude, the day length is increasing by about three minutes a day. The rate of change peaks at the vernal equinox, which this year arrives at 4:37 a.m. on the 20th. At that moment the sun crosses the equator on its journey north and an observer in space would see the Earth lighted from pole to pole. 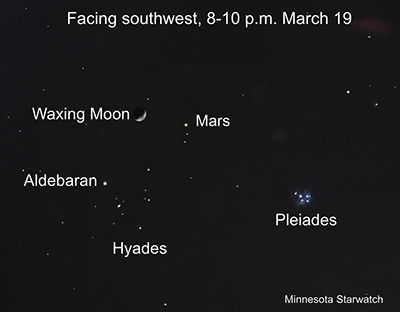 Saturn and Jupiter are reentering the morning sky, but they won’t get high enough for easy viewing till at least mid-month. However, on the 5th, binoculars may help you catch Mercury immediately to the left of Jupiter in the sun’s foreglow, just above the east-southeastern horizon. A better bet that morning is the last-quarter moon hanging above the red star Antares in Scorpius.

On the 14th, the moon begins trekking across the evening sky. On the 19th, it visits Mars as the red planet glides above the V-shaped Hyades star cluster. Next to the Hyades shines Aldebaran, the eye of Taurus, the bull. On the 22nd, the moon appears below the Gemini twins Pollux (the brighter) and Castor.

On the 25th, a hefty gibbous moon appears in the spring constellation Leo, the lion. The moon sits in the Sickle of stars outlining the lion’s head, between Regulus, Leo’s brightest star, and Algieba, a double star system that also contains a planet. On the 28th, March’s full moon rises in Virgo. As twilight fades, brilliant Arcturus, in Bootes, the herdsman, comes out to the left of the moon.

The faint zodiacal light glimmers in the west after nightfall during the first half of the month. A broad finger of light pointing up from the horizon along the sun’s path, this phenomenon is caused by sunlight glinting off dust in the plane of Earth’s orbit.