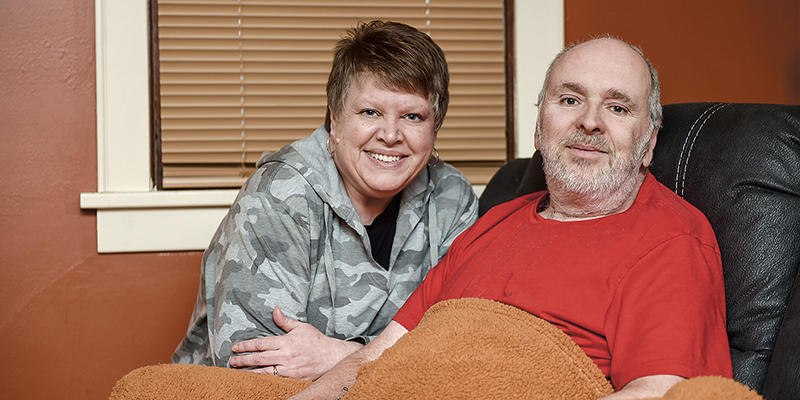 Tim and Kris Burkey are photographed in their home Tuesday evening. The couple will be this year’s Pay It Forward bathroom remodel project. Eric Johnson/photodesk@austindailyherald.com

In February 2020, Tim was experiencing numbness in his hand. Believing he had Carpal Tunnel Syndrome, Tim went to the doctor’s office, where it was determined that he did not have CTS. At the same time, multiple tests were unable to determine what was causing the numbness.

His condition worsened and he eventually began having trouble with his arms and developed leg spasms. He later went to Mayo Clinic, where on Aug. 13 he received a bombshell diagnosis: Amyotrophic Lateral Sclerosis (ALS).

“My reaction and his reaction were completely different,” Kris recalled. “They say there’s only a 2-5 year life expectancy. My reaction is how do we adjust our lives to live with this. I don’t look at the lifespan; I just look at how we can make our lives simpler. His first reaction was ‘this is it.’”

As his ALS has worsened, the challenges have increased. Tim has an electric recliner that is able to assist him with getting up and Kris said that he will soon be getting a hospital bed.

“Currently, I have to get him in and out of bed and it’s getting tougher for me due to that fact that he can’t assist at all,” she said.

One of the problems of the Burkey’s bathroom is how the sink is the first thing encountered when walking in. This is particularly difficult for Tim, who has ALS. Eric Johnson/photodesk@austindailyherald.com

At the moment Tim can still walk, though Kris said his ability to do so has declined over the past few weeks and he will eventually need a wheelchair.

“He can’t pick his feet up,” she said. “He can (walk) when he’s on hardwood floors, but he can’t on our carpet anymore.”

But the biggest issue is their bathroom, which features a clawfoot tub that Tim can’t get into, resulting in Kris having to give him baths. Adding to the difficulty is the layout of the small bathroom, the only one in their Austin home.

It was because of the bathroom that Kris’s sister Lori Martin nominated them for T’NG Plumbing’s Pay It Forward program, which helps deserving individuals by offering a free bathroom remodel.

“This is a situation where he needs this sooner than later,” said TN’G Plumbing co-owner Gina Grundmeier. “This is probably the most urgent need we had of anybody that was nominated.”

After picking the Burkeys, Grundmeier surprised Kris at her office at Cedar Valley Services on Feb. 5 to inform her that TN’G Plumbing would remodel the bathroom to make it more accessible for Tim.

“There were so many emotions,” Kris said, fighting back tears. “She said they would redo the bathroom to make it a safer place for Tim and to make life easier for me with Tim’s needs.”

“Their bathroom is probably 6’ x 7’; it doesn’t fit a walker, more or less a wheelchair, and he can’t use the bathroom at all whatsoever because he can’t get in there at all without help,” Grundmeier said. “What we’re going to be doing is expand the bathroom, we’re guessing by about three feet. There’s a closet that piggybacks along one side, so we’re going to steal that closet and that’ll give us the room to make the bathroom big enough so it’s suitable for a wheelchair, then we’ll widen the doorway for a wheelchair and move the fixtures around so it’s more functional for him.”

The Burkeys’ project marks the eighth big project from Pay It Forward. Grundmeier said construction will be from March 8-12.

“I’m just amazed that they would feel we were the people to choose,” Kris said.