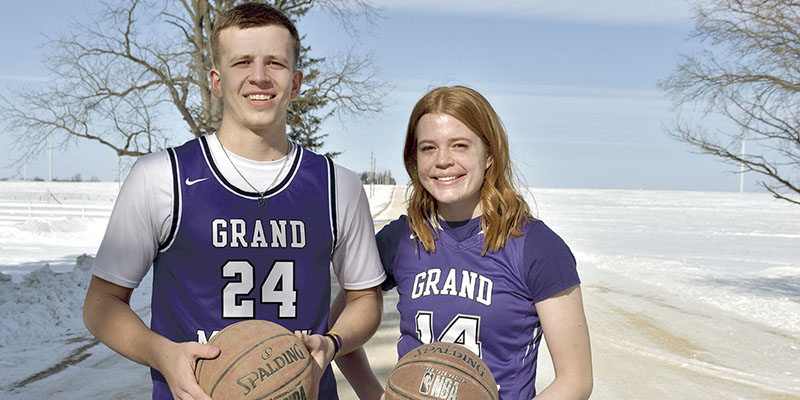 Colt Landers and River Landres have both been big contributors on the court for the Superlrarks. Rocky Hulne/sports@austindailyherald.com

GRAND MEADOW -— Being the only boy in a family with four sisters is an interesting spot to be in, but Grand Meadow senior Colt Landers is a better basketball player for it. The all-time leading scorer in the GM boys program has followed in the footsteps of his older sister Rio and now trains with his youngest sibling River, a junior at GM.

Colt and River, who both start for their Superlark basketball teams, spent a good portion of the COVID-19 shutdown working out and shooting hoops together in their family shed, which Colt helped build with his dad two years ago. That shed also houses a semi truck that their dad drives to haul livestock.

That hard work over the pandemic has paid off for both Landers siblings this season.

Colt currently has 1,728 career points and he’s averaging a shade under 21 points per game this season. He is a steady scorer inside and outside and has his sights set on reaching the 2,000 point mark before his time with the Larks runs out.

“I’m always looking at the games and the schedule keeps getting smaller and smaller every time I look at it,” Colt said. “I didn’t think that this whole pandemic thing would happen when I set the scoring record last year. I was aiming so high and I wanted to break the all time school record of 2,188 points (held by Jessica Benson). I’m setting the bar as high as I can, and with the lack of the games, 2,000 is a tough goal. But I’m up to the task.”

River is just starting to make her name with the Superlarks as she is a major contributor for the first time.

“It’s different for me stepping into a bigger role,” River said. “It’s gone well so far. Our biggest goal is to enjoy our season with the time that we have. Unfortunately, our season could be gone tomorrow. We’re improving game by game. We got off to kind of a rocky start, but we’re starting to find our rhythm and we’re getting in the hang of things.”

Colt and River didn’t have to look far for a role model when they were growing up as their big sister, Rio (Landers) Severson, was a standout post player for the Superlarks. She went on to play college basketball at Dordt College in Sioux Center, Iowa, and the University of Northwestern in St. Paul. She is now a special education teacher at Randolph Public Schools.

Severson has clear memories of a 10-year-old River trotting alongside her for four-mile training runs down the gravel road that runs by the family’s home. She also recalls an 11-year-old Colt shoveling off the concrete in front of the outdoor basketball hoop so he could get some shots off.

“I have memories of bringing them to the gym with me every Sunday when they were really young and shooting outside together for hours in the summer,” Severson said. “When COVID-19 hit last year and all the gyms closed, Colt and River made a commitment to go out to our shed every day to shoot hoops and lift weights together. They motivated one another to keep working hard, even when the fate of their basketball season was so uncertain. I’ve watched Colt and River confide in each other after tough games and remind one another what it means to be a good teammate.”

While Rio served as a motivator, Colt also used basketball as an escape from all of the girls in the house. It was a place where he could be with his thoughts and focus on getting better.

“You’re kind of by yourself a lot until like eighth and ninth grade. I think that’s why I liked basketball. I kept playing and playing and that was really the only thing I could do,” Colt said. “I really liked it and I kept getting better and better. I like to push myself. I’m quietly competitive. I’ll shut up and I really want to beat you. But at the same time, I have a lot of fun in practice.”

The Landers live in the country where they run a hobby farm that includes ponies and ducks. River has learned a lot from living in a big family.

“We’re kind of forced to be involved with the hobby farm, but we do like animals,” River said. “I’ve always had someone to look up to and I’ve learned what it means to work hard and earn your place on a team. Our older sisters started out playing basketball and Rio stuck with it. We watched her work really hard and she got really into it. Then Colt started growing and getting better and I started getting into it. It was really Rio who started our love for the game.”

Colt is a three-year captain for GM and he has been on the varsity team since he was an eighth grader. GM head coach Dakotah Rostad said that Colt is a kind, considerate and respectful player.

“He brings the mentality of pushing himself and his teammates each practice,” Rostad said. “He is a natural scorer, which is great, but what I have really enjoyed seeing is his game evolve year by year. His mindset at a younger age was to get himself a shot or a bucket. As he has matured and grown, his approach seems to have shifted towards an attitude of knowing what he needs to do to score, but also looking to help get his teammates in the best position for them to succeed as well.”

River is a captain for the Superlarks this season and head coach Ryan Queensland has enjoyed having her on a team with a young roster.

“She communicates well with her teammates and coaches and she works hard to bring out the best in everyone. River is a perfectionist and a pleaser that always wants to do more,” Queensland said. “She is always asking what more she can do. She is her toughest critic as well and puts in the extra work to improve everyday. River realizes that sports can teach us so much that we can carry with after graduation. River is a good athlete but more importantly she is a great person.”

Colt and River have each been taking college courses and they both have plans to play college hoops. Colt has drawn interest from Division II and Division III schools, but he’s leaning towards playing at the junior college level next season as the pandemic has made things hard to predict. River has already drawn interest from her sister’s former team at Northwestern and she’s hoping another year of AAU can provide her with more options.

After the pandemic wiped out social interactions and limited in person learning for much of the last 11 months, this season has served as a much needed sense of normalcy, especially after the Minnesota State High School League recently announced it is planning on holding winter state tournaments.

“This year has been really hard to stay motivated for everyone, but I just love it. It’s fun,” River said. “I like pushing myself to be what I can be. I love forming relationships with my teammates and coaches that are deeper than basketball.”