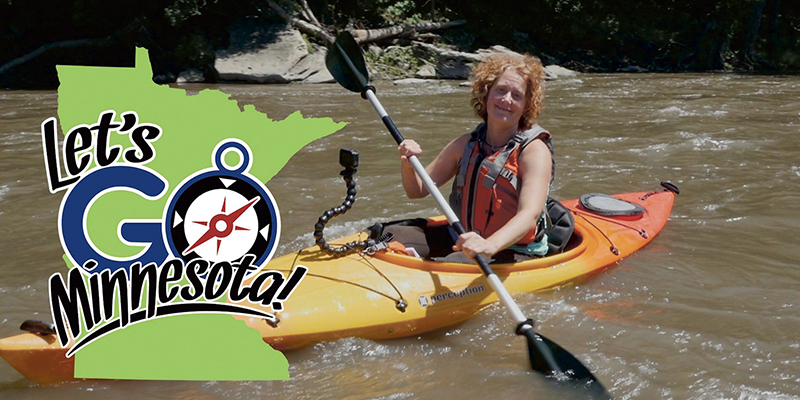 For the first time in its near 50-year history, KSMQ Public Television has produced a series that will be seen on television screens across the country.

Beginning March 1, the KSMQ production “Let’s Go, Minnesota!” will air on Create TV every Monday at 9 a.m. and 4 p.m. for 14 weeks. Each episode runs 30 minutes.

“Let’s Go Minnesota!” is an outdoor nature and recreation program which gives viewers ideas for low-cost family outdoor adventures they can take right here in Minnesota. Each episode features a unique twist: a Minnesota artist joins along and creates a unique artistic expression of the adventure.

“KSMQ’s ‘Let’s Go, Minnesota!’ grabbed us immediately,” said Shawn Halford, Vice President of Exchange Content and Digital Services of American Public Television (APT). “With host Brenda Piekarski’s winning presence, and the unique way that the series incorporates a guest artist on each adventure around Minnesota, ‘Let’s Go Minnesota!’ should inspire viewers across the country to create their own adventures.”

Create TV airs “do it yourself” type programming reaching more than 86 percent of US television households, with 44 million viewers annually nationwide. The network is offered by public television stations, including KSMQ Public Television, where it is seen on channel 15.3. Create TV is produced and distributed by American Public Television, WNET New York, WGBH Boston, in association with National Educational Telecommunications Association and PBS.

Because of its small staff size, creating “Let’s Go Minnesota!” was a determined two-year process for the KSMQ production team. Receiving this national attention confirms that the team vision of what makes good television was spot on.

“Having an original production series selected for national broadcast is certainly a high-water mark in the history of KSMQ Public Television,” said Eric Olson, KSMQ President and CEO. “This program will introduce a national audience to southeastern Minnesota’s natural beauty and outdoor recreational opportunities. Create TV viewers are hungry for this kind of content and we couldn’t be more pleased that they selected one of our programs.”

To aid KSMQ Public Television with its non-commercial, nonprofit mission, viewers can become a member by logging on to the station website www.ksmq.org for more information.

Highlights from “Let’s Go Minnesota!” Season One include