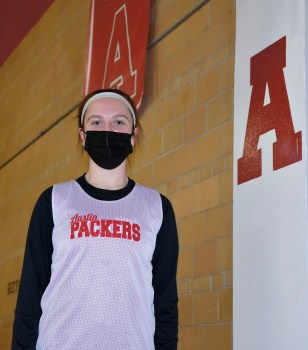 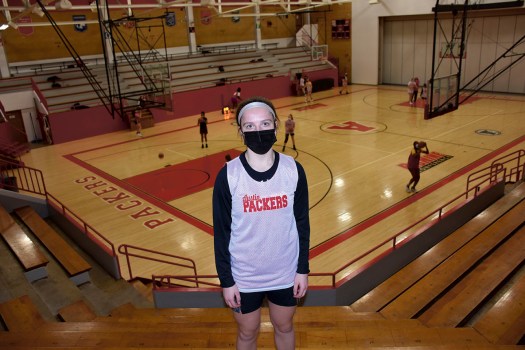 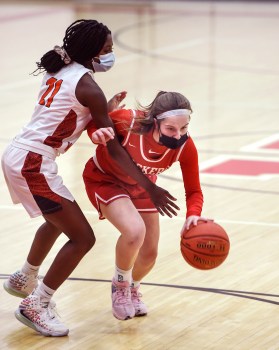 When middle schoolers jump onto the varsity sports scene, it is easy to imagine how good they will be when they grow taller and stronger.

Austin junior Hope Dudycha stands at just five-feet, five-inches and she hasn’t grown much taller since beginning her Packer career as an eighth-grader. But she has grown much stronger, recently becoming the ninth AHS girl to  join the 1,000 point club.

Austin head coach Eric Zoske coached Hope when she was an eighth-grader and he knew she was a special player from day one.

“She’s small in stature, but her game speaks for itself. She’s not going to bring (her accomplishments) up to anybody at school. She’s as quiet and humble as anyone could possibly be,” Zoske said. “She’s really smart and when you combine the skill, the strength and the IQ, she has all three of those. That’s made her really successful.”

Considering she has a lot of time on the court left, Hope could climb up the Packer scoring ladder over time. She saw Austin 1,000 point scorers Colie Justice and Shayley Vesel play, but she is too young to have watched AHS’s all-time leading scorer Lisa Bue, who had 1,592 career points and went on to play at North Dakota State University and professionally overseas.

“It’s cool, because I know how good those girls were,” Hope said. “It’s an honor to be up where they were. I knew I had a chance this season, but I knew I would have to work a lot harder with COVID making it shorter.”

Hope’s scoring output has run like a roller coaster this season. She is averaging a steady 17.5 points per game, but she has four games of at least 24 points and three games with less than 10 points. That production has somewhat been by design as Hope has gone out of her way to feed the ball to her teammates whenever possible.

“I’ve been doing whatever it takes to win,” Hope said. “I feel like I don’t need to score a bunch for us to win. It all depends on how the defense is playing me and if I can set my teammates up.”

Hope’s twin sister Emma, who is also a capable scorer herself, has seen her sister’s game grow this season.

“She just works really hard,” Emma said. “When teams are double teaming her, she still finds a way to create for us and score for us when she needs to. This year, she’s been setting up all of us a lot more than previous years, but she’s still finding a way to score 30 points in some games.”

Emma and Hope have grown up together on the basketball court and they’ve always served as motivators for each other. Emma thrives lining up next to Hope on game nights and against Hope in practice.

“It’s always a battle when we go against each other in practice,” Emma said. “There’s nobody I’d rather go against in practice, because I know she’s going to make me better. I’m super proud of her and there’s nobody who deserves it more with all of the work she’s put in.”

Hope, who has already played in a state tournament as a freshman, is hoping for more big things for the Packers (7-2 overall) this winter. But she has taken the time to let a big moment soak in this week.

“It’s nice to have the love and support from my team and my family,” Hope said. “It’s really nice having Emma out there. She’s ultimately the one who pushes me to get better. We’ve been practicing together and getting better together for years now.”