I mentioned last week that I would be sharing items of interest from the donation of the 1911 Ladies’ Home Journals.  Well, now I am excited to share excerpts from another recent donation.  We now have in our collection copies of over 300 pages of communication to and from Jay C. Hormel while he was serving in World War I.  This resource will allow us to learn more about Jay from his own words. 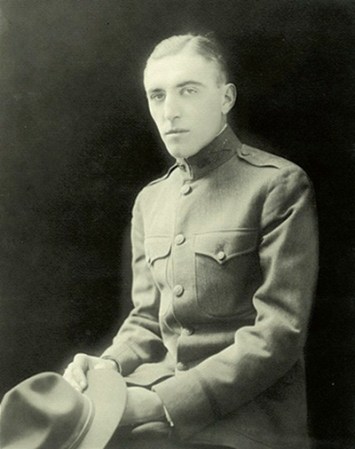 I learned from a letter dated Jan. 10, 1918 that Jay’s outfit would be setting sail for France on Jan. 12.  On Jan. 16 he wrote an updated letter stating that his group was delayed and actually left on the 13th.  He reported that the trip was planned to take 13 days and that he was assigned a room with two other soldiers.

On Feb. 1 he wrote, “At last we are where we have been trying to get for so long.”

Then, on Feb. 4, he penned a much longer, more detailed account to his parents about his journey to and arrival in France.

“It got so rough that even the sailors admitted that it was a moderately rough trip, so I figure that it must have been at least that…One night we were sitting in the dining room playing cards and right back of us the Victrola, which was tied to a post but not fastened to the floor, was chasing itself round and round the post.”

“There are lots of interesting things I could tell you about what happened, but you know we have censorship rules, and so I have to leave them out.  I can say, though, that they kept us busy on board.”

“I am sorry that I can’t tell you what port we entered France in, but that is one of the things that must not be included in a letter.”

“I was the first one from our outfit to get ashore.  They keep the men on the boat until they get a place to send them, for you can well imagine that they would run hog wild if suddenly turned loose in an unsuspecting French seaport.”

“Well, now that we are here, I must say that we are in a very beautiful country, and this in the middle of their worst season.”

“Got Mother’s letter of Dec. 27th and two copies of the Hearld today.  That is the first mail any one has gotten and it sort of burned some of the boys.  But it looked good to me.”

The only problem with being given access to these historic words is the amount of time I am spending reading when I should maybe be doing something else.

Limited capacity.  Free for members of the HHH, Mower County Historical Society and Friends of the Library.  $5 for nonmembers

Just Say I Do Pop Up Wedding Event