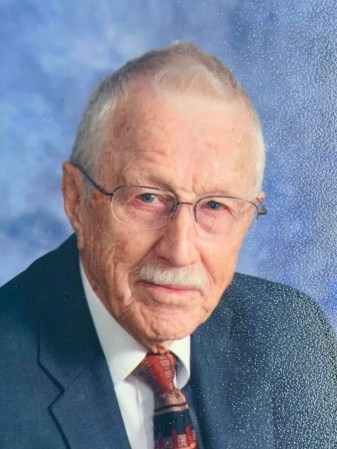 Hobe was born on April 1, 1920 in Ceylon, MN on his home farm to Cole and Agnes Belknap. He earned his undergraduate degree from Iowa State University in agriculture. Hobe was a U.S. Veteran serving in the Army Air Corps during WWII. On October 22, 1955 he married Elizabeth Rogstad in Minneapolis, MN. They started their marriage in Galesburg, IL where Hobe worked for Doane Agricultural, before transferring to Austin, MN. Throughout the remainder of his career in Austin he worked for Doane Agriculture, Austin Farm Center and Lutheran Brotherhood before retiring from St. Olaf Lutheran Church. Hobe and Elizabeth later adopted two children: Richard and two years later, Margaret.

After retirement you could find Hobe spending endless hours in his woodworking shop. He volunteered at Comforcare assisting with BINGO and enjoyed delivering Meals on Wheels.

Memorial services will be held at 11:00 a.m. Monday, February 8th at Clasen-Jordan Mortuary with Reverend Liz Erickson Officiating. Visitation is one hour before the service Monday.