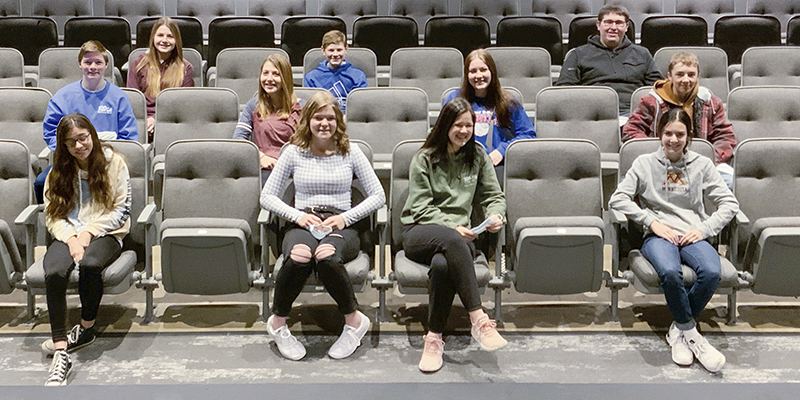 The cast of “On Eagles Wings” are photographed in the Southland auditorium. They recently performed a play by Adams resident Susan Okima Vickmark Torkelson. Photos provided

ADAMS -— Everyone has their own way of dealing with grief, and Susan Okima Vickmark Torkelson found a way to turn her grief into an exercise of unity and playwriting.

After using a Zoom call to say goodbye to an aunt who passed away from COVID-19 in Omaha, Torkelson, who is an EMT, began to write a play for the Southland One Act Play Team. The play demonstrates what it would be like for a high school student with COVID-19 who is about to go under a respirator talking to his loved ones over a Zoom call. 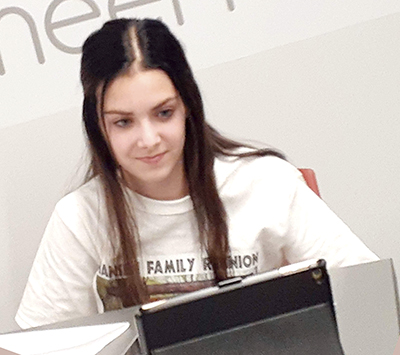 Lynsey Wilson performs a portion of “On Eagles Wings,” through Zoom.

“It was a good distraction. I didn’t know what to do with the grief anymore,” said Torkelson, who also lost an uncle in Cedar Rapids to COVID-19. “The play was inspired by that call. The video we did with my aunt was very moving and we ended up making connections as cousins, even though we live far apart. We touched base in ways we wouldn’t have touched base with before. There was laughter, tears and there was a little bit of everything.”

The play is entitled “On Eagles Wings’’ and it is emotional, timely and convenient. Director Madlain Vander had been planning on using a different play, but that turned out to be impossible when the MSHSL announced all plays must be submitted via video and Southland’s brand new auditorium was closed due to COVID-19 restrictions.

Vander was ready to call it a loss until Torkelson convinced her to go forward with her play.

“Susan and I have formed a friendship over the years. Our kids are family. Her children feel like they’re mine and vice versa. I’m all for collaborations and we’ve always worked together,” Vander said. “I was going to give up, but the kids wanted to do it and Susan went with it. As I was trying to talk everyone out of it, she was already saying she had an idea.”

The play was done completely virtually as actors filmed scenes from their homes. There was a storm that shut down the internet one night and cancelled practices, and there were often frozen Zoom screens that put a halt to rehearsals.

Southland student Isaac Helgerson carried the weight of technical support by making things work and sophomore Aidan Kiefer played the lead role as a teenager who is hospitalized COVID-19.

Kiefer said it was a little tricky to act in front of an iPad tablet in his bedroom. 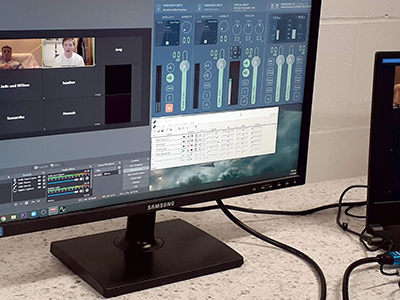 The entire process of recording the play was done virtually, creating a unique experience for the players. Photo provided

“It was hard at times, and then easier at other times,” Kiefer said. “We had quite a bit of practice. We would go for an hour and half at times. We put our heads down and drove through it.”

Kiefer’s mother works as an ER nurse at Mayo Clinic in Rochester and she was able to lend him a robe and an oxygen mask to make his room look like an authentic hospital room.

Kiefer said that his mother was happy that he was able to help display the seriousness of COVID-19 in a play.

“She seemed happy about it. She wants people to witness this and see it as a real thing,” he said. “I’ve always thought this virus is deadly, and it’s going to take its toll.”

Torkelson said Kiefer did a great job of showing the struggles of a COVID-19 patient and she was pleased with the work of the entire cast and crew.

“Aidan really impressed me. It’s very difficult to play someone who is sick. I hand it to these kids,” Torkelson said. “If I didn’t have good kids to take it and work with it, it wouldn’t have gone anywhere. It was exciting to see it come to life. Kids themselves are dealing with switches and they’re being pulled all over the place. In their own personal lives I’m sure there were challenges. The whole pandemic is adding stress to everyone’s life.”

Vander is planning to eventually put on a public showing of the play in the auditorium when regulations allow for it. She already knows that it was a hit with the MSHSL judges.

“We’ve never gotten better critiques. They just loved the play and it was amazing. I’m very excited to pursue publishing this,” Vander said. “We played into what’s going on in the world. This may be the first COVID play out there and it captures history. It’s pretty cool.”