Another one: Kelly scores a fifth AHS record

Joseph Garry swims in the 50-yard freestyle for the Packers. Rocky Hulne/sports@austindailyherald.com 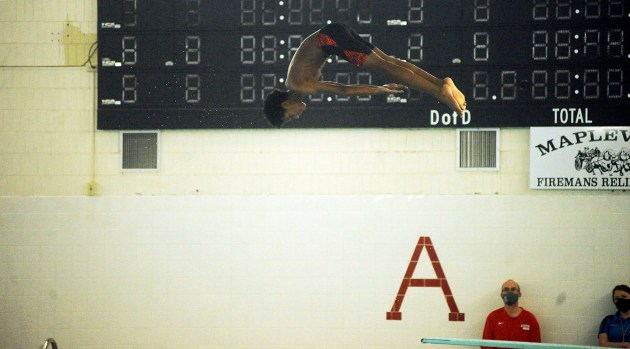 Austin’s Riley Haugen swims in the 100-yard freestyle for the Packers. Rocky Hulne/sports@austindailyherald.com

Just about any high school swimmer in the nation can swim for five minutes straight, but very few can swim the length of five football fields in five minutes.

Austin senior Logan Kelly finally accomplished that feat as the Packers beat Red Wing in a virtual meet by a score of 94-87 when he swam the 500-yard freestyle in a time of 4:49.93 to break an AHS record in Bud Higgins Pool Thursday. The previous record of 4:55.15  had been set by Sawyer Myers in 2015.

Kelly has swam the 500 less than 10 times in his high school career and it was just his second time swimming the race this season.

“I’ve been going after it for two and half years now,” Logan said. “It’s good to be done with that race. Now that I have the record, I don’t want to do it anymore. That race is hard.”

Logan now has his name attached to five Packer records as he holds the school’s all-time marks in the 200-yard individual medley and the 100-yard breaststroke. He also swam on the record setting 200-medley and 400-freestyle relays in 2020.

Logan would also like to chase after records in the 200-yard freestyle and 100-yard butterfly in the remainder of Austin’s season. The Packers have three regular season meets left and they are also scheduled to compete in the Big Nine, Section 1A and possibly state meet, which is scheduled for March 18 and March 19.

Logan said the state meet is a great boost to his morale and he’s also glad to have that 500-yard freestyle behind him.

“I haven’t swam it a lot, but it’s enough to know how to swim it,” Kelly said. “It’s a pretty hard race, especially mentally. It’s probably the most mental race because you have to make sure you’re not going too fast.”

Austin head coach and Logan’s father, Ryan Kelly, said that he has stopped putting limitations on Logan’s goals and the 500 record is just another moment when his son has competed with excellence.

“Every year he proves me wrong, so I stopped doubting him. I told him before this year to go get that record and beyond that, do everything we can to have a good year,” Ryan said. “We didn’t know what this year was going to bring and that was one goal. We knew we would have a lot of virtual races and we didn’t know if we would have state.”

The Packers have a couple more weeks to tune up before they must prepare for the conference and Section 1A meets. Considering it is a shortened season, Ryan is happy with where the team is.

“There is still work that has to be done, but we’re ahead of where I thought we would be,” Ryan said. “We’ll see where all of the pieces fit together for Big Nine and sections. There are some guys that are really turning the corner right now and that’s fun to watch.”