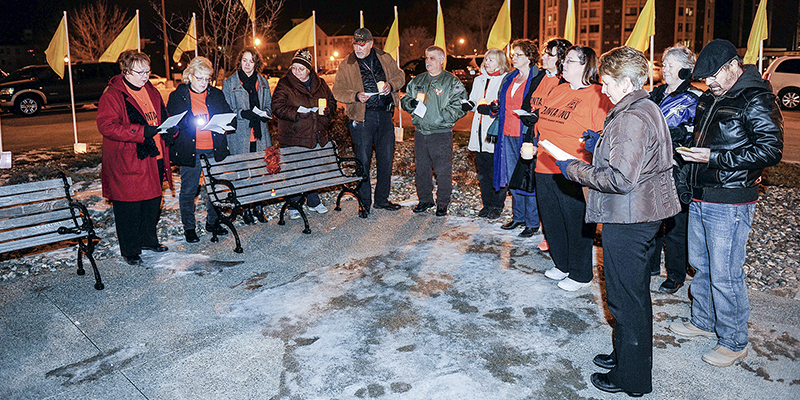 Members of the Zonta Club and supporters held a candlelight vigil on Dec. 11, 2014, at the Peace Plaza to cap off the 16 days of Activism Against Gender-Based Violence campaign. Herald file photo

This week, the Austin chapter of Zonta celebrated its 70th anniversary of service.

During that time, the chapter has worked toward serving its community and its philosophy of advancing the lives of women and children around the world.

Over these 70 years, Zonta has seen changes and made adjustments in how it operated.

“When I joined, everything was done in proper sequence,” said current President Cheryl Retterath, who joined Zonta in 1998. “It was very strict in the beginning. If you missed two meetings, you had to attend all the rest of the meetings the rest of the year.”

However, Retterath said that as society changed, so did the group. It had to adapt to changes as women began juggling more and more things in their lives.

Still, the major work didn’t stop as Zonta around the world picked up the important causes at the heart of its philosophy.

Awareness has been raised through its campaign Zonta Says No to Violence, recognized yearly Nov. 5-Dec. 10. They also host a Women of Achievement Dinner as well as raising money for scholarships, including the Jane M. Klausman Women in Business Scholarships that go to college students in their second year, as well as the Young Women in Public Affairs scholarship for high school students.

Zonta also hosts scholarships for non traditional students and those working toward their GED.

It’s not an accident that education is so important to Zonta in terms of advancing women and girls. It’s an important connection to help bridge the goals and empower them.

“It’s very important because in today’s society, unfortunately, there is so much violence,” Retterath said. “It’s not brought out for people to know about. [Victims] are afraid to talk to people. We need to raise awareness so they can speak out.”

Members of Zonta will never stop in their work, and they hope that more will pick up the cause. In Minnesota, there are only five Zonta chapters.

“We would like to see that expand,” Retterath said. “Help mentor a new club in Albert Lea and Rochester.

Zonta not only helps support causes at home, but it also works hand in hand with the international body. Here are some of the things they contribute to:

• Adolescent girls health and protection in Peru. Health is not a top priority. Work is done to get medical supplies to Peru.

• Delivering survivor center response in Papua New Guinea and Timor-Leste. Remove violence from that area for women and girls.

• Let Us Learn Madagascar. Empowering girls through education because if they are educated, they stand a chance of getting jobs or doing their own kind of business for their family.