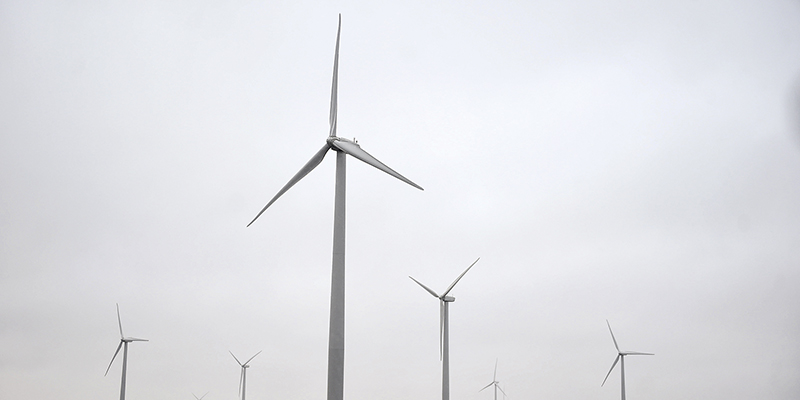 Wind towers, owned by Xcel, west of Grand Meadow. Xcel is moving toward updating the towers that will make them more efficient, as well, creating more energy. Eric Johnson/photodesk@austindailyherald.com

Xcel Energy is hoping a proposed upgrade to its wind towers near Grand Meadow will move the wind farm further into the future.

The company held a virtual open house Thursday night about the project that would extend the life of the farm to 2048 and produce at least 10 percent more energy.

“As a national leader in wind energy for more than a decade, repowered wind projects like Grand Meadow will help us reduce carbon emissions, keep bills affordable for our customers and help create good jobs that will help the economy recover,” Xcel said in a statement to the Herald.

Xcel recently received the go-ahead from the Minnesota Public Utilities Commission to begin developing the repower project, along with three other farms in the upper Midwest.

The towers in question near Grand Meadow include 67 towers on 10,000 acres in Grand Meadow, Clayton and Dexter townships.

“We’re thrilled,” said County Administrator Trish Harren. “When you can create a more efficient (operation) with the same footprint with the least amount of disturbance of the environment or the neighborhood while increasing productivity — we really appreciate that.”

The wind farms have been a boon to Mower County. Thanks to the money generated from wind farms, the county has been able to keep its levy down. This year alone, the money was able to shave about 10 percent off the levy.

The company will now begin working with landowners in the area as well as local governments and state agencies. That work will include extending lease agreements and securing additional permits, including a specific amendment to the project’s site permit that will approve the repowering effort.

On the county side, the rest of the process will be fairly hands off.

“We work with the townships that are impacted,” Harren said. “The key job is developing a development agreement over protection of the roads.”

The permits required will be on a state level.

“Typically the standards of the state are higher than the normal level,” Harren said.

Xcel is hoping to receive permit approvals this year or 2022, with an aim of 2023 for construction.

The company has set its own goal of an 80 percent reduction of carbon emissions by 2030 with a hope of going carbon-free by 2050.

The wind farm was originally built in 2008 with an expected lifespan of 25 years. The turbines will have their blades replaced with longer blades and more efficient turbine operating systems that will boost the targeted efficiency and energy production goals.

The blades themselves will allow for the more efficient capture of winds at current operating speeds.