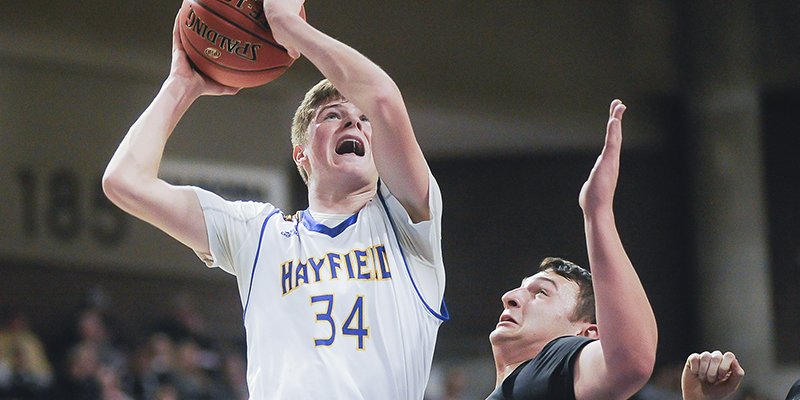 Games scheduled to begin on Jan. 14

After waiting more than 40 days, the green light is back on for high school sports.

For those athletes and coaches who have been stuck with virtual practices, garage workouts and no contact with their teammates, the return couldn’t come soon enough.

There will be a mood of caution mixed with anticipation as area teams get back to practice on Monday and prepare for a winter sports season that will run from mid-January to late March.

Hayfield boys basketball coach and athletic director had a fall season packed with cancellations and rescheduled events and now he’s looking forward to getting back in the gym with the Vikings, who lost the Section 1A title game to Blooming Prairie in March of 2020 -— one day before the original COVID-19 shutdown began.

“I’m well past ready for it. I need to get in a gym and start yelling at guys again,” Pack said. “These guys have been playing as much as they can, but it’s different when you’re together as a team. I think it’s much needed. I know my son (Hayfield sophomore Ethan Pack) gets bored pretty easy when you don’t have that structure with a game and practice schedule. It’s long overdue, not to say that the pause was wrong, but these kids are ready and I think it’s time to get back. It’s going to be a crazy year.”

The next stage of MSHSL sports will include masks in hockey and basketball and it’s still uncertain if fans will be allowed into the arenas. There is a section of the schedule reserved for tournaments after the regular season, but nothing is official yet.

“It’s a minute to minute type clarification. What is said today, could change tomorrow,” Austin Activities Director Lisa Qwednow said. “ Our coaches are ready to see our kids again and I’m looking forward to seeing kids in gyms and rinks again. I’m hoping we can follow the protocols, wear masks and stay open.”

Adjusting to playing in a mask may be difficult for some athletes, but players who competed in the fall have already had to adjust to limited locker room access, no post-game handshakes, and socially distanced sidelines.

“I think it’ll take a little while to get used to it,” Pack said. “I’ve been looking at some of the stuff that’s been going on in Wisconsin. They said after a few days the kids hardly notice and I’m hoping that will be the case. I hope our kids can roll with the punches and it won’t be a big deal. This is the hand we’ve been dealt and we’re going to do the best we can with it and not make any excuses. The teams that are resilient will be better suited to be successful. There’s no point in complaining about it because it’s not going to get us anywhere.”

If fans are allowed at events, it will be limited but there is still the option of living streaming, which makes the action on the court or rink viewable from anywhere in the nation.

Qwednow said she’s already working on setting up live streams for all sports, although gymnastics could be a little tricky with the four different event stages. She’s also working on a plan to get disposable masks to teams so players can change throughout the contest if they build up too much sweat.

While things will look very different this winter, the important thing is that the games are back on.

“I just think it’s good for kids, coaches and our community,” Qwednow said. “I think that those team relationships are important and anything we can do to get kids going is going to be positive.”