Pedal to the metal 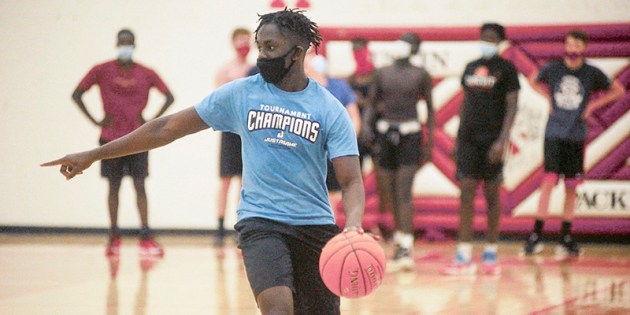 Okey Okey handles the ball in practice for the Packers Monday. Rocky Hulne/sports@austindailyherald.com 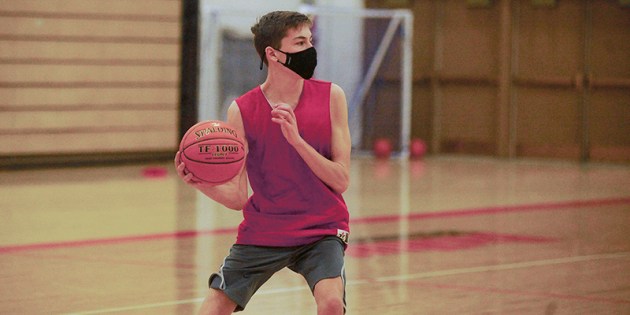 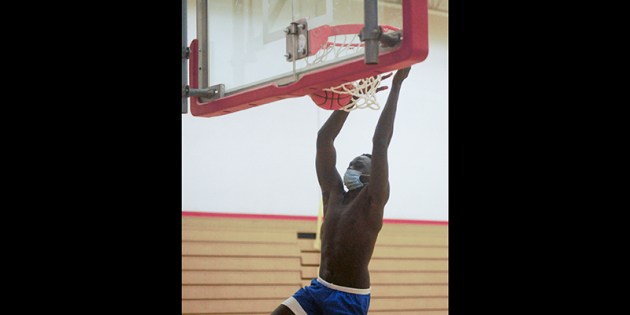 Victor Idris goes up for a jam in practice in Packer Gym Monday. Rocky Hulne/sports@austindailyherald.com 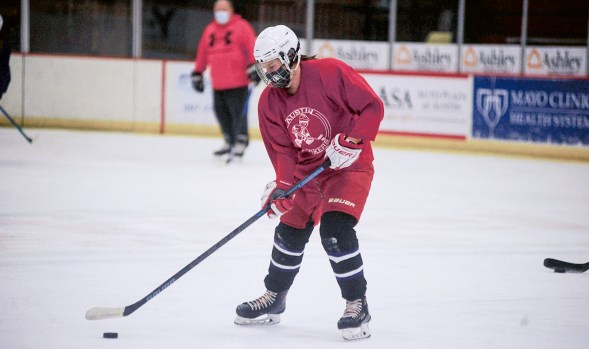 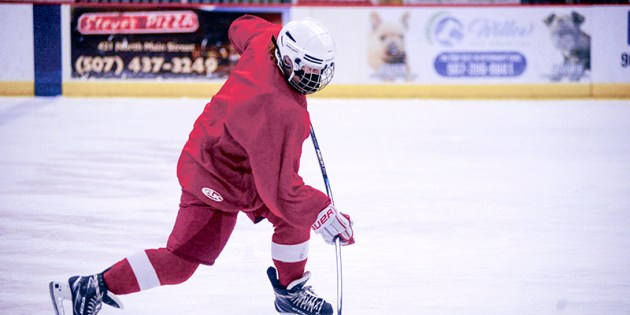 Austin’s Kate Holtz fires off a shot in Riverside Arena Monday night. The Packers are back in practice and ready to roll for the season. Rocky Hulne/sports@austindailyherald.com

After nearly 300 days on the shelf, winter sports teams are now facing the prospect of having just ten days to prepare for their first contests of the 2021 season.

Basketball and hockey teams will also have to adjust to competing with a mask on during that stretch.

The Packer boys basketball team has gone to state six times in the past nine seasons, but they are already battling a new opponent -— fatigue. With gyms being closed and outdoor courts snowed in, the team hasn’t had any chance to prepare itself for its season opener  at Northfield at 7:30 p.m. on Jan. 14.

Austin head coach Kris Fadness said he had to slow down drills and provide plenty of breaks during the team’s first practice of the season on Monday.

“It’s been tough,” he said. “You can tell the guys have not been in the gym for awhile and a lot of guys are not in very good condition and I worry about playing a game in eight days. I worry how in shape we’re going to be and how ready we’re going to be. We’re not going to be as advanced going into the first game as in past years. It’s a big concern. It’s going to be baby steps and your goal is to get better every day.”

Austin will  host Red Wing at 7:30 p.m. on Jan. 16, giving the team two games in three days after a long slumber. Austin senior Okey Okey said players were able to get into the YMCA before the latest shutdown, but it’s been tough to put in work over the last 40 days.

“It feels good to be back here. It’s been nine months,” Okey said. “It’s a little tiring and the masks make it harder. We’ve got to fight through that.”

Like many seniors, Okey has hopes of playing college basketball and after a limited AAU season, he would like to get in as much action as he can this winter. This could be the season for him to break out as the Packers graduated Agwa Nywesh, their top playmaker from last season. Nywesh is now playing at Western Nebraska, a Division I Junior College.

“I’m very glad that we’re having the season,” Okey said. “I want to play college basketball and I’ve had a couple of teams looking at me, but with this season I can show what I can do.”

While the Packer boys are hoping to get in gear, the Packer girls hockey team is fighting a similar battle on the ice. The team had Zoom meetings and at-home workouts leading up to the season, but it hasn’t had much time on the ice since last season ended.

Austin senior Lexi Stitch said it’s been a challenging start, but there’s nowhere else she’d rather be.

“You appreciate everything 10 times more (after the delay),” Stich said. “It was a lot of waiting. I’m just excited to be able to play in my last season. Even if we have to wear a mask, it’s not that bad. It’s just a new thing that we have to get used to. We’re back as a team and it feels good.”

Kate Holtz, a junior, is hoping the Packers can put together a successful season this year, despite having to cope with masks and a short amount of preparation time.

“I think it’s important that we’re all back here to play for the seniors,” Kate said. “We’re all glad to be back. It’s hard to breathe, but we’re working towards being able to wear them in games, where we don’t get breaks.”

Austin head coach Troy Holtz said the Packers have had to adjust to wearing masks and he’s had to adjust to using an electric whistle in practice. He thinks the Packers’ amount of players will give them an advantage as they try to play themselves into shape this season.

“We have a lot of depth and we have four or five lines of kids that can play varsity hockey. I think that our depth will help us,” Troy  said. “There’s no way we’re going to be in shape to play a game in a week and a half. Some of the players have been on the pond at Skinner’s Hill or in the backyard, but that’s only been for a week. It’s a challenge for everyone, we’re not the only ones. Everyone has to figure out how to get through it.”