‘Pedal to the Metal:’ Packers come out running against Falcons 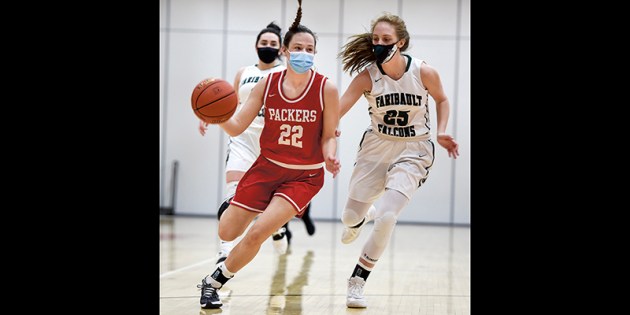 Austin’s Olivia Walsh brings the ball down court against Faribault in the first half Tuesday night in Ove Berven Gym. Eric Johnson/photodesk@austindailyherald.com 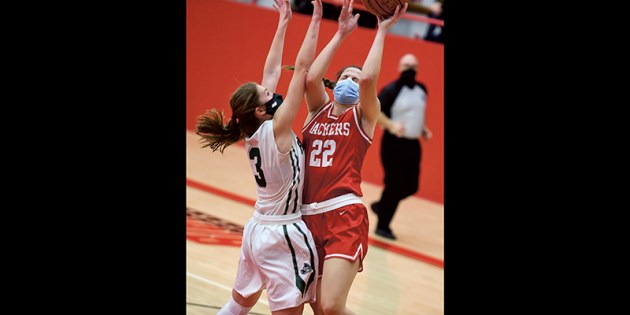 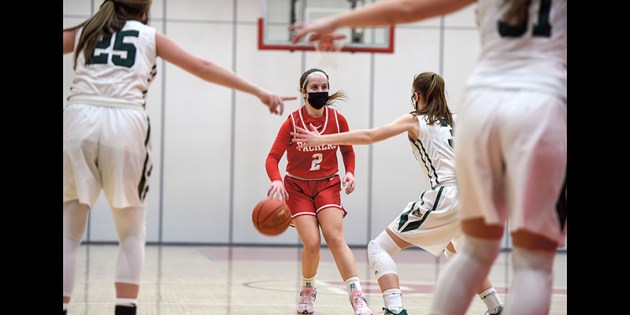 Austin’s Hope Dudycha runs the offense during the first half against Faribault Tuesday night in Ove Berven Gym. Eric Johnson/photodesk@austindailyherald.com 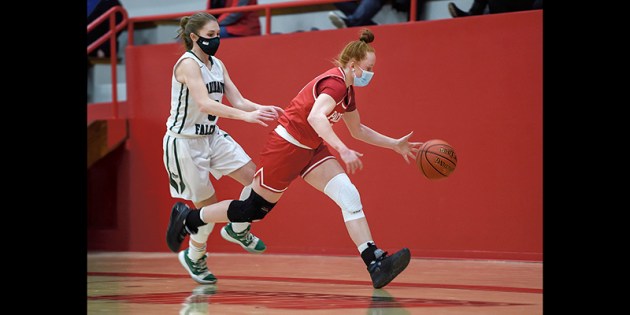 Austin’s Cassidy Schute tries to track down a loose ball against Faribault in the first half Tuesday night in Ove Berven Gym. Eric Johnson/photodesk@austindailyherald.com 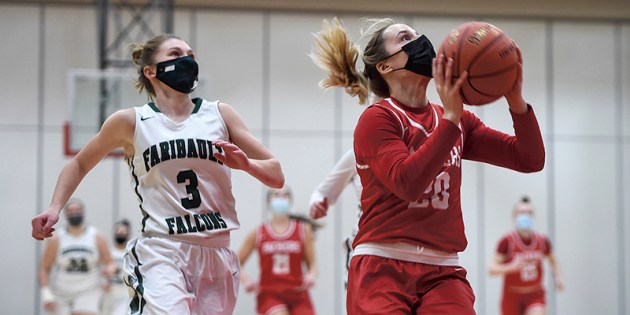 The Austin girls basketball team had to wait nearly 300 days to get this season started, but they only had to wait 10 minutes before building their first 30-point lead of the season.

The Packers raced to a blazing pace as they scored the first 33 points of the game in a 76-32 win over Faribault to open the season in Ove Berven Gym Tuesday night.

Emma Dudycha, who had 19 points and three steals, hit two threes and converted a lay-up to give Austin (1-0 overall, 1-0 Big Nine) a 10-0 lead in the first few minutes. The Packers didn’t stop there as they held a 33-0 lead until the Falcons (0-2 overall, 0-2 Big Nine) finally got on the board when Maryn Hart converted a free throw with 5:51 left in the  first half.

Austin head coach Eric Zoske said that opening run showed him how glad he was to have his team back in action after having to stay patient for the past few months.

“I knew that I missed this, but after that first run being so fun, they proved to me exactly how much I did miss this,” Zoske said. “It’s been over 10 months since we last played and for these girls, with everything they’ve had to adjust to, to come out with maximum energy shows the type of kids that we have.”

Zoske spent a good portion of his summer studying the defense that the Austin boys basketball team uses. The Packer girls did a strong imitation of that defense on Tuesday as they forced a plethora of Faribault turnovers and turned the game into a track meet. Austin led 69-12 in the second half before it pulled its starters.

“We spent a lot of time focusing on what we do when our top defender gets a tip,” Hebrink said. “The tip is just the start of it, because then our wings get the steals. Our main goal is to play fast and outrun teams this year. We’re going pedal to the metal.”

Austin junior Reana Schmitt, who had 19 points and nine rebounds, and sophomore Cassidy Shute, who finished with 10 points and four assists, both made good on their first career starts with the Packers.

“Cassidy hit her first three threes and Reana had three and ones,” Zoske said. “Our time over the summer was limited, but these girls put in a lot of time on their own and I was happy for both of them.”

Schmitt, who played No. 1 singles for the Packer tennis team this spring, spent a good portion of her summer on the AAU circuit as she played on two teams and logged in a lot of minutes.

“I just worked in the dark this summer,” Schmitt said. “I was so excited to play tonight that I didn’t really notice the mask until I was breathing heavy.”