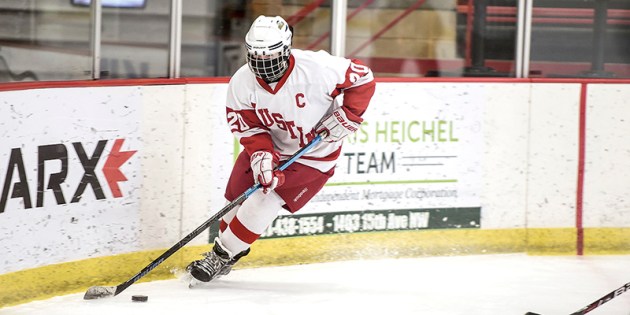 Austin’s Kate Holtz swings the puck along the boards during the first period against Rochester Mayo Thursday evening at Riverside Arena. Eric Johnson/photodesk@austindailyherald.com 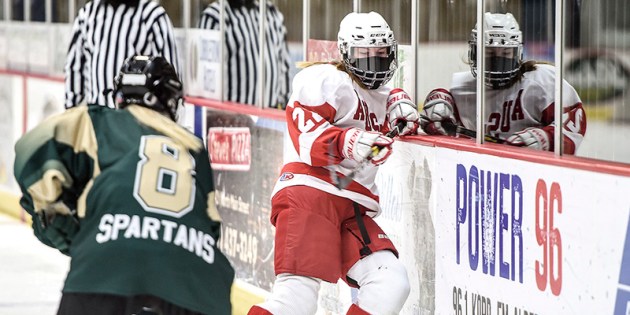 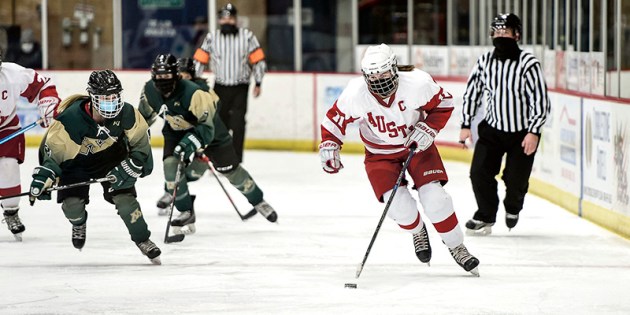 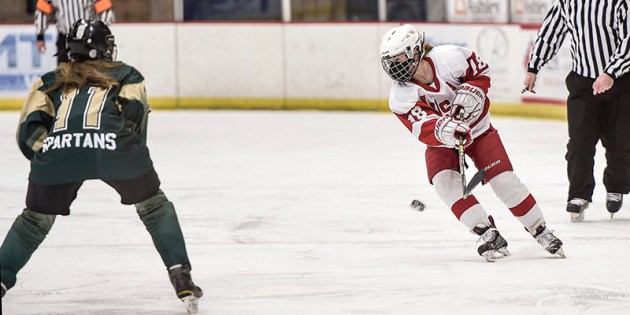 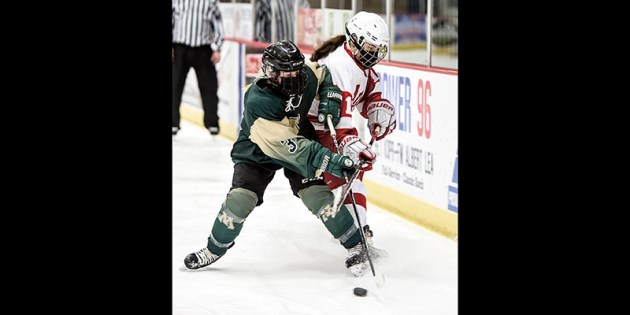 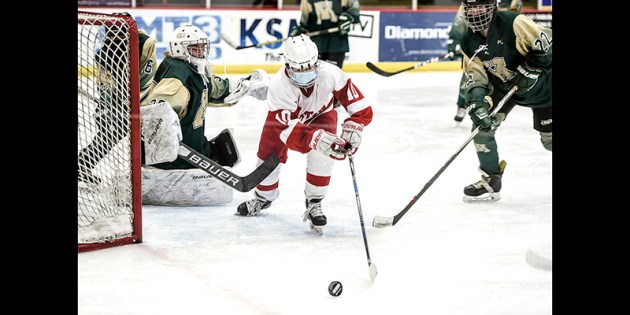 It’s not always how you start, but how you finish. The Packer girls hockey team proved that saying as they erased a 2-0 first period deficit to beat Rochester Mayo 3-2 in Riverside Arena Thursday night.

As usual, it was Austin junior Kate Holtz who made the biggest play of the night for the Packers (3-0 overall, 3-0 Big Nine), who have now won three in a row.

Holtz’s heroics came right on time for Austin as she took a pass from Izzy Hemann and slapped a shot against the grain across her body to beat Mayo goalie Grace Kober’s stick-side to give Austin a 3-2 lead in the third period.

Holtz had just a split second to release the shot as she was skating away from the net.

“I’ve done it before, but it’s not easy because you go from your backhand and over,” Holtz said. “You’ve just got to shoot quick and hope you get it to the right side where it isn’t. It’s just a reaction and you hope to get it wide because the goalie is hopefully sliding over to where you are.”

Shelby Davidson stopped five Spartan attempts in the last two minutes to seal the win as she finished with 36 saves. Mayo pulled its goalie with 1:03 left.

Maci Talamantes was able to slide a perimeter shot past Kober to score her first varsity goal and tie the game at 2-2 early in the third period.

“That was kind of nice for her to get that and I think the goalie got screened on it,” Austin head coach Troy Holtz said.

After struggling in the first period, the Packers came out with some fire and controlled the puck in Mayo’s zone for extended stretches. Austin pulled to within 2-1 when Holtz scored early in the frame.

“In period two and three we had more scoring chances,” Troy Holtz said. “In the first period we were giving up a lot of shots from the point, so we switched our centers and the goal was to tie up at all costs. It kind of made a difference with their opportunities because their strongest two players are their defensemen. We wanted to keep it off of their sticks.”

Mayo (0-2 overall, 0-2 Big Nine) scored the first goal of the game when Elle Roth scored on a power play with 7:20 left in the first period, just two minutes after Austin’s Sarah Wangen had a nearby shot attempt deflected off the post.

The Packers were able to hold up on defense despite moving Wangen to forward.

“We took one of the best defenseman away from them and we went down to Sam Krueger, Cassidy Davidson, Allie Davidson and Peyton Squier and Maci,” Troy Holtz said. “They really played well and I’m really happy with Sam and Allie.”

Kate Holtz, who now has eight points and five goals on the season, said the Packers are feeling good about their fast start.

“We really pushed hard in the second and third period tonight,” she said. “We knew we had to keep going and we really had some energy when we tied it. We’re really happy right now and we hope to maybe extend that win streak to a couple more.”