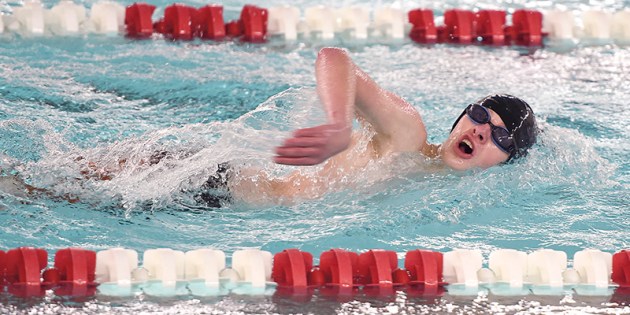 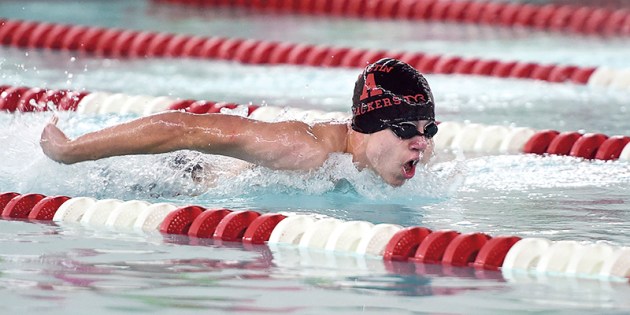 Joseph Hilkin swims the breastroke for Austin in the 200 yard medley relay during a virtual meet with Winona Thursday night at Bud Higgins Pool. Eric Johnson/photodesk@austindailyherald.com 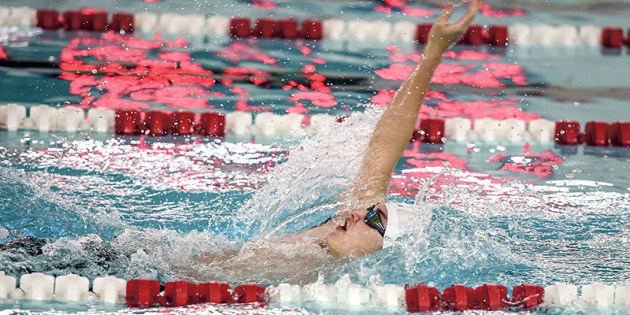 It won’t be easy for the Austin boys swimming and diving team to replace some of the top tier athletes, who graduated from last year’s squad, but the Packers are sure going to try.

Austin had a lot of swimmers in expanded roles Thursday night, as the team defeated Winona 90-89 in a virtual meet in Bud Higgins Pool.

Austin junior Matthew Grush was one of the Packers who is being asked to do much more this season and he got off to a solid start as he placed third in the 500-yard freestyle and fourth in the 200-yard freestyle.

“I’ve been on the team for awhile and I’ve always been a younger guy with people to look up to. Now that I’m one of the older guys, it’s kind of scary knowing that people are going to depend on me more,” Grush said. “It took a lot of work to get here and there were a lot of hours in practice. We always push, but there’s always been times that I’ve doubted that I can do as well I can do.”

While other area sports were called off due to weather on Thursday night, the Packer swimmers were able to compete virtually with the Winhawks. The dual didn’t include any fans, but that doesn’t mean there wasn’t energy in the venue.

“It was a lot different than I expected,” Grush said. “I was expecting it to be a little less exciting, but it was lots of fun and we all did really well.”

Austin freshman Riley Ferguson spent the last couple of seasons diving next to four-time state qualifier Riley Norton, but now Ferguson is ready to take on his role as the leader of the Pack on the diving board. Ferguson took first and finished with a score of 151.72 on Thursday after just a week and a half of practice.

“It’s good to be back on the board, but it’s pretty tough,” Ferguson said. “We didn’t get any time over the summer and we had a short amount of practice time before the meet. The coaches have pushed us and it was great to be out here.”

Ferguson has just one diving teammate in eighth-grader Isaiah Cabeen. Ferguson sees some potential in his younger counterpart.

“We support each other a lot,” Ferguson said. “He’s going to be a lot better in a few years.”

Austin senior Logan Kelly started off his season with a strong finish as he swam the 100-yard butterfly in 53.21 seconds. That time was within striking distance of the AHS record of 50.77 seconds, which was set by Ben Walker in 2016.

Winston Walkup took first in the 100-yard backstroke and the 200-yard individual medley.