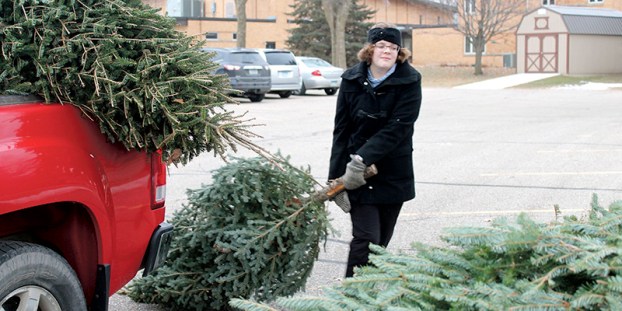 Pacelli student Kylee Christopherson pulls a tree to the pile in the St. Edwards Catholic Church last year. Students, faculty and families of Pacelli will once again be taking part in the annual Christmas tree pick-up fundraiser. Photos by Laura Sheedy

Traditions are often a major part of remembering the good times we have with friends and family. 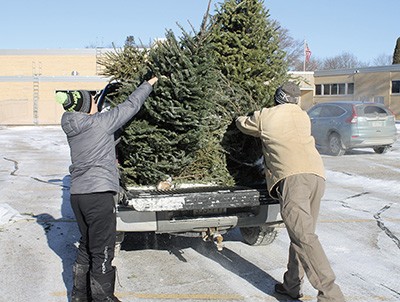 The annual Christmas tree pick-up fundraiser by Pacelli students, staff and families is one such event that checks all the boxes of a good tradition.

Since the mid-2000s, the tradition has raised money through free-will donations, from the collection of discarded Christmas trees.

“Keith Leif thought the idea up,” said Pacelli Activities Coordinator Laura Sheedy. “Before we had a corn maze, but they started thinking of a new idea. Why don’t we pick up Christmas trees?”

Generally, the pick-up is done not long after the new year passes. People will call and put their addresses on the list followed by a delivery of their donation.

The day of the pick-up, volunteers with trucks, along with students and staff, go about Austin and collect the trees before dropping them off in the St. Edwards Catholic Church parking lot.

From there, the trees are taken to Sheedy’s farm where they are put through a woodchipper and used around the family farm.

The money raised from the pick-up goes into a general fund to be used for the benefit of Pacelli students.

But the pick-up goes beyond the money raised. More often than not, it’s the memories made that really make an impact. 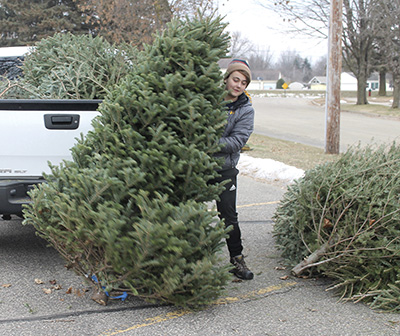 Picking up the Christmas trees is a way for students to get out and help the community.

“I would say it’s a fun experience,” said senior Kylee Christopherson. “You’re with your friends. When you’re going around, it’s early in the morning, but you know it’s for a good cause.”

Building memories with friends comes along with a side order of just being able to get out in a year where COVID-19 has kept so many inside.

“I think right now, since we’ve been in quarantine, we don’t get out much,” Christopherson said. “It’s nice to get out and see your friends and have some fun.”

Junior Sam King, like so many students, has been part of this fundraiser since freshman year.

And like so many others, it goes back to the memories. It didn’t take King long to come up with one of his favorites.

“I’ve always had this one memory with Luke Weaver and his dad,” King said. “At one point we had so many trees, me and Luke had to get in the back and hold to the trees.”

According to King, the money has been coming in at trickle so far, but will begin picking up speed as the day of pick-up comes closer, which this year is Saturday, Jan. 9.

Organizers ask that when preparing a tree for pick-up, that people remove ornaments, lights or anything that would have metal in it.

Trees should also be placed on the boulevard for easy pick-up.

While raising money is a major goal of the pick-up, there is a healthy dose of pride that comes along with it.

“I feel good,” Zachary Bollingberg said. “It kind of helps the school and the community. You’re giving back your time and effort for those who need it.”

County holds first round of vaccinations