According to the court complaint, a Mower County deputy respnded to a sexual assault report on Dec. 21 at a hog farm. The victim, an adult female employee, reported Solano had sexually assaulted her the previous day. An adult male employee said the victim reported the incident to him and he had made Solano leave the premises. 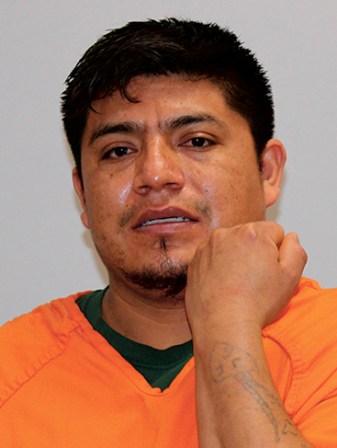 The deputy spoke to the victim with the assistance of Language Line. She indicated that hog operation employees were required to shower before and after their shifts and she was in the women’s shower facility when Solano pulled back the curtain and said he wanted to shower with her. She told him “no” and she struggled with him to get out of the shower. She indicated Solano followed her to the dressing area and tried to force her onto a wooden bench to have sex with her, but she kept pushing him away. She said he tried to restrain her by holding her wrists and hips and that he inappropriately touched her. She also said he tried to take her bra while she was getting dressed and said he was going to keep it.

The victim showed the deputy social media messages from Solano asking her to “forgive” him and that he was “sorry.”

On Dec. 22, the deputy read Solano a Miranda warning and spoke to him with the assistance of Language Line. Solano the victim used to “sexually harass” him and touch him inappropriately. He said because the victim had touched him previously and he wanted her to stop “harassing” him, he tried to “scare” her. He indicated that he “pretended” that he was about to “do something” to her, but he “wasn’t about to rape her.”

He admitted he went into the victim’s shower area, pulled back the curtain, and put shampoo in her hair. He described his actions as “playing around” and that he followed her out of the shower and then “just left.” He denied that he followed the victim to where her clothes were located; however, when asked about taking her bra, he admitted he took it while she was getting dressed. Solano then said he also tried to get the victim to lie down on a bench, but he was “just trying to scare her.” He also indicated that he held onto her while she was naked and that the victim had pushed him away about three times.

Solano acknowledged what he did was wrong, but maintained that he was trying to “scare” the victim. He admitted to sending messages telling her he was “sorry,” but said he did not recall touching her inappropriately.

A pre-trial has been scheduled for July 2.