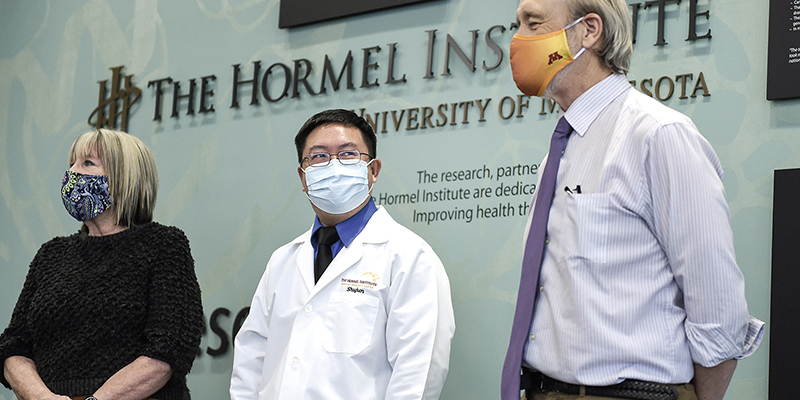 Dr. Shujun Liu, head of the Cancer Epigenetics & Experimental Therapeutics lab at The Hormel Insitute, stands with Executive Director Dr. Robert Clarke and Gail Dennisen, Director of Development and PR during a press conference Wednesday to announce Liu’s awarding of a nearly $4 million grant from the National Institutes of Health. Eric Johnson/photodesk@austindailyherald.com

A scientist at The Hormel Institute has received a big boost in the fight against leukemia.

During a press conference Wednesday, it was announced that Dr. Shujun Liu has received a nearly $4 million, five-year grant from the National Institutes of Health. The grant money will go toward identifying targets to stop leukemia progressing.

“More than half of patients relapse and die,” Liu said. “Why do these cells survive through therapies?”

The highly lucrative grant stands out not only because of the amount but because of the climate in which it was awarded this year. Only a slim margin of scientists have received grants from the NIH.

“It’s really quite an achievement for anyone to get funding from the National Institutes of Health,” HI Executive Director Dr. Robert Clarke said. “To give you an idea … only 10 percent.”

This leaves 90 percent of scientists on the outside looking in.

The project, worth $3,995,031, will look to discover how the changes in DNA methylation patterns affect cancer formation and progression, possibly leading to new treatment drugs.

Specifically, this research would look into a subgroup of leukemia — acute myelogenous leukemia. AML is an aggressive hematopoietic malignancy that progresses rapidly and gets worse at a faster rate if not treated.

It makes up just one percent of cancers and is one of the most common leukemias with almost 20,000 new cases each year.

“Our findings will provide information and new therapies for patients that previously would be given a poor prognosis,” Liu said. “This will open the door to better ways to treat leukemia.”

It is hoped that the research can lead to the identification of biomarkers that would make it easier to direct treatment to patients who would benefit the most.

“I am extremely thankful to receive the grant as it opens the door for research to identify important new markers and targets for leukemia, a cancer that still is a significant threat to people,” Liu said.

In short, “This project allowed us to find the gene … [and create] a therapeutic target to stop disease recurrence.”

It’s an important step because of the rise in risk should the disease come back.

“It doesn’t matter what the cancer is,” Clarke said. “If we fail to cure it, it becomes very difficult when it comes back. It’s adapted to treatment.”

The grant is the end result of 6-7 years of work by Liu and his team. Liu, who heads the Cancer Epigenetics & Experimental Therapeutics Lab at the Institute, hopes this will lead to even more breakthroughs going forward.

“We hope this is just the beginning,” he said. “We want to use this five-year grant to develop the next grant.”