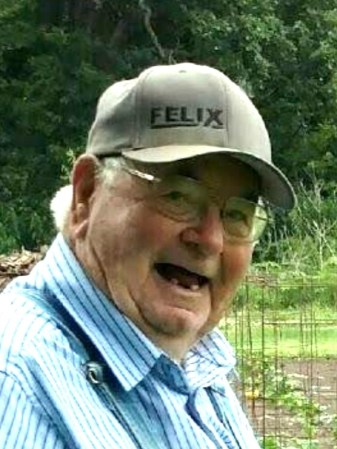 Dean Edward was born on September 5, 1935 in Fort Dodge, Iowa to Ernest E. and Elizabeth (Harklau) Martin. At the age of 9 he and his family moved to Minnesota. Dean began farming the family farm at age 19 after loosing his father Ernest. On May 18, 1957 he was united in marriage to Jean Louise Haukom.

Farming was Dean’s passion, which he continued until 2006. He was also employed by Ulland Brothers for 33 years as an operator and foreman, retiring in 1998.

Dean was a history buff, loved farming, and enjoyed fishing. After his retirement he enjoyed the cabin up north with many hours of fishing with family and of course “man’s best friend”, Jake! He was a longtime member of Oakland Midway Lutheran in Freeborn County.

He was preceded in death by his wife Jean; parents; 3 children, Charlie, Jessie and Jeremi; grandson, Adam Anderson.

Private family services will be held on Saturday, January 9th at Clasen-Jordan Mortuary. The service will be available for viewing on Monday at www.clasenjordan.com

Interment is planned for 2:30 p.m. on Saturday at Hillcrest Cemetery in Oakland, and is open to the public.