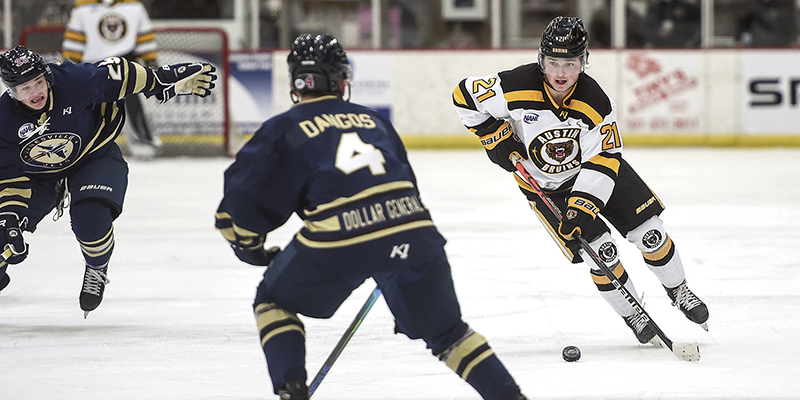 Austin’s Kyle Olesiuk brings the puck up ice in the second period against Janesville at Riverside Arena. Eric Johnson/photodesk@austindailyherald.com

The Austin Bruins have announced the full schedule for the remainder of the 2020-21 season.

The unofficial second half of the year begins for the Bruins on Jan. 17 with a road game showdown against the Minnesota Wilderness. The Bruins will then head to Marshall to go against the temporarily relocated Fairbanks IceDogs on Jan. 21.

The Bruins will play nine of 12 games at home during the month of February and split March with five home games and five road games. With the NAHL season extended into May, the Bruins will see five games that month with four of them, including the regular-season finale coming against the St. Cloud Norsemen. Fans can see the entirety of the Bruins schedule by visiting www.austinbruins.com/schedule.

With the state of Minnesota announcing new restrictions on indoor events and activities, the Bruins announced that 150 fans will be permitted to the upcoming home games until new guidelines are set forth by the state. With only 150 fans permitted at this time, the Bruins will not be selling single-game tickets and would be considered sold-out for all future games. The 150 fan limit is entirely met by season-ticket holders. The team is working on ways to find single-game tickets to make available for the general public and news on that is expected in next week.

As for current season ticket holders, an email will be released in the next few days with details on what ticket in the season ticket holder booklet will be used for what game. Signs will also be posted at the arena to assist in what ticket to tear out to gain admission. For non-season ticket holders who can’t get ahold of a single-game ticket, all Bruins contests including home and away games can be heard on Power 96 or seen on HockeyTV with the voice of the Bruins, TJ Chillot, bringing you all the action.