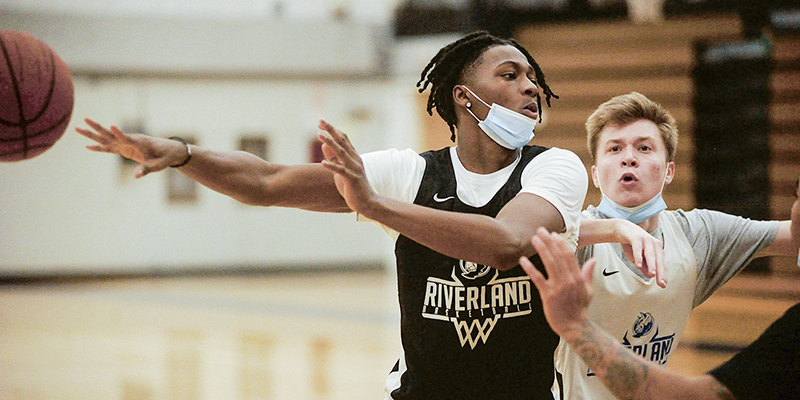 After waiting through the shutdown, Blue Devils are back on the court

This week has been the start of a promise kept for the Riverland Community College men’s basketball players who stuck it out through the pandemic.

While some athletes stayed away from colleges due the pandemic, and some left school due to the uncertainty of a season, those who remained are now preparing for an NJCAA Division III season that is set to tip off on Jan. 21 and run until at least mid-April. 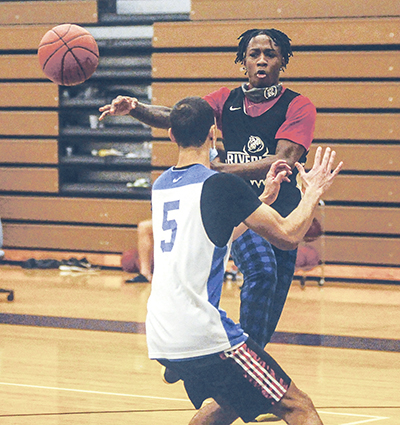 Cleveland Bedgood, a guard from Florida, was back on the court running through two-a-day practices with his teammates this week. He never lost faith, even when several MCAC squads gave up on the season and his classes were moved to distance learning this semester.

“It’s not a mental struggle for me. I just look at it as a good opportunity to open new doors for the future. I’m trying to stay positive,” Bedgood said. “We have some things that we need to work on, but it’s going well. It’s a marathon. It’s a big relief and we’ve been waiting to get in the gym and start our season. I had my doubts sometimes, but the coach told us we were going to have a season and he’s a man of his word. We just want to win. We just have to work hard and not worry about mistakes.”

The Blue Devils are expected to play a schedule that includes some non-conference matchups and three matchups with the remaining conference foes – Fergus Falls, RCTC and Minnesota West. The season will include a four-team Regional Tournament that is played at high seeds, but there is no decision on a national tournament yet.

Riverland head coach and athletic director Derek Hahn has been waiting for quite some time to get his guys on the court and he’s glad to finally get things started.

“We tried to do everything we could to keep them around, but it was a major challenge and we lost kids in the transition part of it. Guys were losing hope and it seemed bleak at times,” Hahn said. “When we had nine teams that we were going to play and then it dropped to four, that made me a little nervous. Our administration has been awesome throughout this process. They’ve been super supportive of our athletic department, which is a really good sign for the future of Riverland athletics. They’ve been on board since day one that they want us to have a season.”

The Blue Devils have been near the top of the MCAC as they’ve combined for nearly 50 wins in the past two seasons. While much of the players who played big minutes for last year’s RCC squad have moved on, Hahn is hoping his young players can find their footing this winter.

“Our guys are going to be battle tested moving forward because they stuck with it. This is a group that’s really young and we have a lot of guys that have high school success,” Hahn said. “In terms of being where we were in the past year, I don’t know if we’re there yet. We usually have a couple of months to prepare for a season and this year we have 17 days to throw it together before our first game.”

Besides Bedgood, the Blue Devils are looking to Joe Burgos and Austin grad Ngor Deng to step up this season. The team has almost all new faces, but Burgos said they are ready to gel and compete after a long wait in isolation.

“It’s been tough, because you want to play,” Burgos said. “I just kept going forward and I kept thinking the season was coming the next day. Then it came, and now we’ve got to prepare for it. It felt good to be out here. We knew each other a little bit, but now we’re getting to know each other better and we’re getting better.”

As the season draws closer, the only thing certain is uncertainty. Hahn has his team prepared for whatever is on the horizon.

“Our kids are sticking with it and we’ll see how it goes,” Hahn said. “We’re one positive test away from having to make adjustments and I’m sure we’ll have to deal with that at some point. We’re trying to follow the protocols and play in as many games as possible.”

RCC is scheduled to play its first game on Jan. 21.

The Blue Devils are also hoping to have women’s basketball, softball and baseball this year. Spring sports would start in late March, meaning Hahn, who also coaches the baseball team, will have a stretch of double duty.