The Best of Times 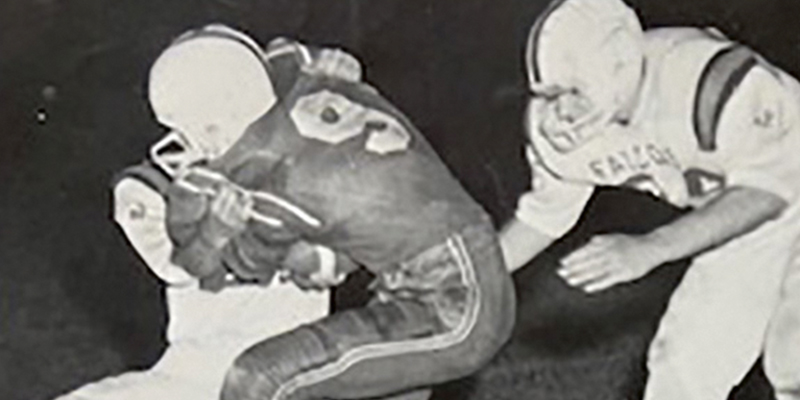 It was the 1960s, the players were small, the hits were big and the Austin Packers were king of the hill.

Austin put out two of its best football teams ever in 1961 and 1966, as each team went unbeaten and was declared the mythical state champion by the Minneapolis Tribune. Both teams were undersized and neither had huge expectations going into the season, but when the smoke cleared, they stood atop the rankings of the entire state of Minnesota, regardless of school size.

The teams were both coached by Art Hass, who now has Austin’s football field named after him, and they both included players from the same bloodline. To this day, there are still arguments over which team was better.

The years have marched on and players have moved on with their lives, but the question remains after nearly six decades: Which team was better?

Ron Clennon may have as good a perspective as anyone on those teams. He played fullback for the 66 team and his older brother Pat played on the 61 team. Rod’s best friend was Dan Ruzek, the star halfback of the 66 team, and Dan’s older brother Mike played for the 61 Packers.

Clennon still has vivid memories of watching Pat’s team settle for a 13-13 tie in front of a crowd of 5,500 against Rochester John Marshall and he still can feel the excitement from when Austin topped No. 1 ranked Minneapolis Washburn in 1961.

“They had to bring in extra bleachers for the Washburn game and it was a big deal. It put Austin in the position to be state champs,” Clennon said. “We always gave each other hell about it to find out who would’ve been the best team. They had some pretty good kids. We did too. The teams were probably very much alike, even with personnel. We always claimed that we were the best team, because we were undefeated. It was an interesting comparison.”

Mike, a sophomore fullback on the 61 team who went on to play football for four years at Luther College, said that he felt his team’s defense would eventually wear down the front line and offset the speed of the 66 Packers.

“Those guys were even lighter than us,” Mike said. “They could’ve been in rib cage anatomy and you could count their ribs with no problem at all. They were quicker than us and they probably would’ve taken a lead, but our tenacious defense would’ve busted them up and we would’ve won 28-14.”

Taking it to the metro

When No. 1 ranked Minneapolis Washburn brought multiple bus loads of fans to Austin and extra bleachers were placed in the end zones, the 61 Packers knew they had a big game on hand. It was the game that helped win the state title for Austin after the Packers prevailed 13-6.

Tom Hardy fumbled the opening kick-off and put the Packers in an early 6-0 hole, but he had the last laugh when he broke free for an 88-yard TD run off the left tackle to ice the game with 3:28 left. Hardy’s run came after the Austin defense had twice stopped Washburn deep in Packer territory.

It’s been nearly 40 years, but Mike can still picture Austin’s fan base jumping to its feet as Hardy got loose for the season defining score.

The win over Washburn put the Packers on the map for the state title chase and it gave them immediate respect as a contender.

“For Washburn, they were coming down to play the ‘plowboys,” Mike said. “You can believe the metro had an edge in the state rankings. Over the years, I have really come to dislike that word ‘mythical’ champion. I don’t think that’s the right word. Consensus is more of a fair word. If we didn’t go undefeated in the Big Nine, which was a tough conference back then, and beat one of the top metro teams, we wouldn’t have been considered.”

Austin lineman David Jensen took his fair share of hits during the game and the contact didn’t stop when the game was over.

“Washburn had these expectations that they were going to come down and teach us a lesson,” Jensen said. “I didn’t get hurt in the game, but after the game I got kicked in the foot by a Washburn fan.”

Shooting down the Rockets

If you wanted to win the Big Nine in the 1960s, you had to take down the Rochester John Marshall Rockets, who were coached by John Drews, who now has JM’s stadium named after him. Mike was a sophomore at Luther College when his brother Dan and the 66 Packers were hosting the Rockets and it was a game that he could not miss.

Dan was playing in his second game after coming back from a back injury that caused him to miss five games, but he was more than ready for the Rockets as he ran for three scores in a 28-21 win. Ruzek scored on a 65-yard catch from Rick Heard, a 43-yard run and a 23-yard catch on fourth and eight to give Austin a 28-14 lead.

“It was an outstanding year and the big game was Rochester JM, which was the WCCO game of the week,” Dan said. “I was lucky enough to get three touchdowns in that game.”

Dan could run a 10 second 100-meter dash and his speed carried over to the football field.

“We were thin and fast and quick, and Rick Heard could throw the ball well,” Dan said.

Mike, who served as a big role model for Dan, said the JM game was one of the only times he saw Dan play football. Mike and his other brother David were able to wrangle up some cars and get from Luther to Austin for the game, which was the Homecoming contest.

“We wanted to see that game. We were never so proud of our brother,” Mike said. “Dan had three touchdowns in that game and they beat Rochester pretty handily. Rochester was always a big power.”

The loss was JM’s only defeat in an 18-game stretch.

Austin’s most dramatic win that season was when Steve Krob kicked a last second field goal to beat Winona 10-7, but the win over JM was what gave the Packers the edge on the rest of the state.

If you played for Austin head coach Art Hass, there was never a question about who was in charge. Hass had high expectations for his players and he was tough, but fair. He demanded physicality from his team and he could often be heard shouting out “I want a peer six brawl out there!”

“You didn’t call him coach or by his first name;he was always Mr. Hass,” Clennon said. “In the Winona game, I was playing half back instead of fullback and I was struggling with the adjustment. I asked if I could go back to fullback and he kind of scolded me for asking and said to play where I was told.”

Hass also didn’t allow swearing on the team and if a player let out a curse word, they were forced to apologize to the team or they were off the team. If a player committed a personal foul or unsportsmanlike foul, Hass would sit them on the bench for a lengthy period of time to let them ponder their actions.

Hass served as a marine for four years during World War II before coming to Austin, where he taught junior high social studies. He led the Packers to six Big Nine titles and three state titles -— in 1958, 1961 and 1966 — while compiling a record of 165-53-8. He retired in 1981 and died in 2005, and he’ll always be remembered by his players.

Like most teams in the 60s, Hass’ Packers ran a Wing-T that demanded linemen to consistently execute blocks, while the backs had to hit the hole. The Packers ran about 12 plays and rarely passed, but they produced a lot of big plays.

Mike recalled an especially hot day in August when the Packers were sweating it out and taking a break. Austin’s players could see Pacelli’s football team going through its drills as they rested and recovered.

“The Pacelli coach was hollering and screaming at his kids while we were taking a knee,” Mike said. “Art looked at us and said ‘you know, fellas, it could be worse.’”

That Pacelli team also went unbeaten in 1961 and beat some of the metro schools. A lot of people in town wanted to see the Shamrocks and Packers face off for one final game, but it never happened.

“At the end of the season, there was a lot of talk at Hormels of having the teams play to see who was king of the hill,” Mike said. “The Protestants were on one side and the Catholics were on the other and my dad said it got pretty spicy. The school officials decided that it wasn’t going to happen and each side would have eternal bragging rights.” 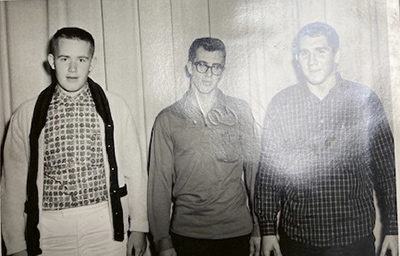 Every friendship has a beginning. For some, it involves riding the bus together on the first day of school. For others, it may stem from a chance meeting in a public place.

Jensen remembers exactly where he was when he met the Ruzek boys.

Jensen, the Ruzeks and all of the other Packers who put on the pads had a much different experience than players of today, who are often playing in organized youth leagues by the time they are in third grade. There was no youth football and there certainly were no traveling teams.

In those days, kids would gather whatever gear they could find and play backyard football. The games would be casual, with older brothers serving as refs, but they established what elementary school would have bragging rights for the day.

“It was all about grabbing your helmet and playing football,” Clennon said. “We had our own playbook and we had a pretty sophisticated system. There was no adult supervision and it was just backyard stuff. It’s something kids are lacking now. We did our own thing.”

All of that time doing their own thing paid off for the Packers, who always had high expectations in sports in the 50s and 60s.

“There was always a high expectation for Austin in football and basketball. There was lots of pressure to keep going and to do well. That’s a pretty high expectation to win every game every year in the Big Nine, which was a very competitive league,” Jensen said. “The stars aligned in 1961. We had competition in our schedule and good things happened. Rochester, Winona and Owatonna were ranked high and they had guys that went on to play Division I football.”

HOW THEY STACK UP

1961: The Packers went 8-0-1 overall and had three shutout wins. They racked up 2,115 rushing yards and threw for 416 yards. Only one team scored more than once against Austin, which outscored its opponents by an average of 22.2-3.5 per game.

The Packers relied on the running of Dan Ruzek and Rod Clennon, while quarterback Rick Heard gave the team a capable passer. Kim Keller and Steve Krob were key linemen.