Santa Claus is coming to town … in slightly better conditions 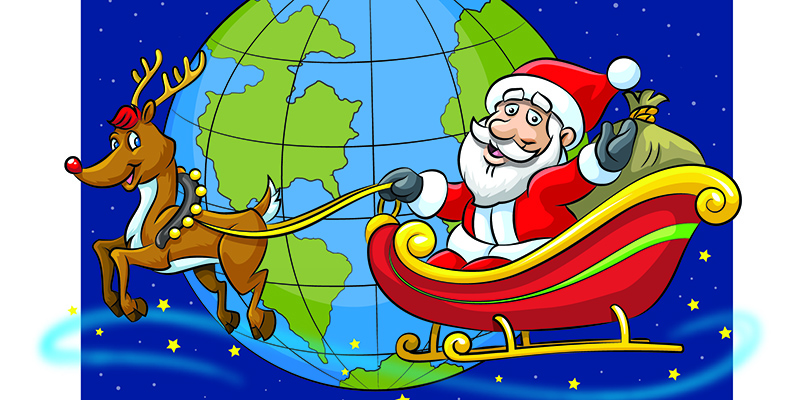 The last couple days might have been a little rough, but never fear. Santa Claus is coming to town.

As of this morning, the NORAD Santa Tracker had Santa coasting over Southeast Asia and will get partly cloudy skies tonight into a sunny Christmas Day, perfect for present delivery.

It’s a far cry from Wednesday’s savage blizzard conditions brought on from the area’s first major system of the year, Austin and Mower County seems to have gotten away with lower snowfall totals. However, Austin remains in a windchill advisory through noon today.

According to the National Weather Service, local observations put Austin totals between 1 and 2 inches.

Higher totals were reported the further north you went, with Hayfield reporting just over two inches of snow. Totals leapt noticeably though, just a few more miles north as Owatonna and Faribault areas saw between 7 and 8 inches.

However, it was the winds that made things particularly dicy as gusts in some parts of the state reached more than 60 mph. The system also affected travel conditions creating slippery conditions and whiteout conditions.

According to the Twitter account of Minnesota State Patrol’s public affairs officer Sgt. Jesse Grabow, from 9 p.m. Wednesday to 6 a.m. this morning there were 59 crashes, 153 vehicle spin-outs and eight jackknifed semis.

Temperatures today will peak at 3 degrees according to the NWS, but will rise to 23 degrees under sunny skies Christmas Day.

A couple systems are hovering on the horizon with a chance of snow Saturday into Sunday night, followed by a stronger systems Tuesday night into Wednesday, according to the NWS. However, the impact of these two systems is currently unknown.

Get the kiddos and gather them around to follow Santa’s path across the globe. Visit: www.noradsanta.org

• Official NORAD Tracks Santa apps are available in the Apple and Google Play stores, so parents and children can count down the days until Santa’s launch on their smart phones and tablets!  Follow Santa’s journey and share your story on Facebook and Twitter @noradsanta using the hashtag #NORADTracksSanta.

• Starting on Dec. 24 at 2:01 a.m. EST, website visitors can watch Santa make preparations for his flight. NORAD’s “Santa Cams” will stream videos on the website as Santa makes his way over various locations. Starting at 6 a.m. EST trackers worldwide can call to inquire as to Santa’s whereabouts by dialing the toll-free number 1-877-HI-NORAD (1877-446-6723) where they will either speak with a live phone operator or hear a recorded update. Due to COVID concerns, the NORAD Tracks Santa Operations Centre will have fewer operators, so callers who do not reach a volunteer will hear a regularly updated recording as to Santa’s current location. Additionally, any time on Dec. 24, Amazon Alexa users can ask for Santa’s location through the NORAD Tracks Santa skill for Amazon Alexa, and OnStar members can push the blue OnStar button in their vehicles to locate Santa.

• For over 60 years, NORAD aircraft have identified and intercepted aircraft in the execution of NORAD’s North American air sovereignty and air defense missions. NORAD is on alert around the clock, every day.