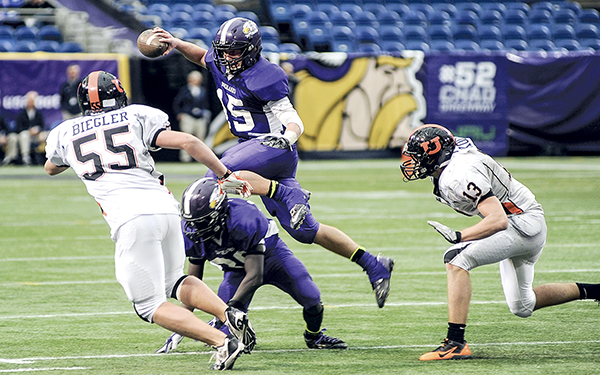 The Grand Meadow Superlarks were the kings of nine man football from 2012 to 2016 and it’s an era that likely won’t be matched by any program in our area any time soon.

A lot of Superlark fans probably thought the team had reached its peak when GM went 12-2 and lost to Clinton-Graceville-Beardsley in the state title game in 2012.

I knew the Suparlarks were just getting started when sophomore Landon Jacobson told me that he was going to be in the weight room the next day to start training for next season. Jacobson was up to his word and his work ethic led to a football dynasty in GM, but the question today is could the first GM champions in 2013 hold their own against GM’s most recent championship team in 2016.

The best team GM’s run of domination was undoubtedly the 2014 squad, but that team had players from the 2013 and 2016 squads, making it tough to decide who to match them up with.

The 2013 Superlarks went 13-1 overall, with their lone loss coming to Lanesboro — a team they blasted 35-6 in the playoffs. GM won its state title by overpowering Underwood 28-6, but it’s biggest test came in a 35-18 win over Mountain Lake Area at Southwest Minnesota State University in the state quarterfinals.

Here are the key matchups from those squads:

In 2013, Trenton Bleifus was a dual threat playmaker for the Superlarks as he threw for 1,524 yards with 15 TDs and six interceptions. He also ran for 718 yards and 20 TDs.

The 2013 team relied on Brenn Olson, who threw for 1,082 yards with 14 TDs and one interception. Olson, who would be throwing against his older brother Blake if this game ever happened, also ran for 408 yards and six TDs.

Advantage: Bleifus was one of the best, if not the best, ‘true’ quarterbacks ever to play under head coach Gary Sloan. He could read a defense and make the right throw, and he also knew when to take off and run. Olson was a highly intelligent quarterback, but his ability to make plays wasn’t quite as effective as Blefius’s.

Grand Meadow’s Christophor Bain breaks through a hole on a run against Cleveland-Immanuel Lutheran during the second quarter of the Minnesota State Nine Man Prep Bowl in 2016. Herald file photo

Landon Jacobson was an absolute terror in the backfield in 2016. The future Winona State player ran for 1,900 yards and 29 TDs, while catching 12 passes for 272 yards and a TD. Jacobson battled injuries throughout his career at Winona State.

On the flip side, there are probably some Minnesota nine man teams who can still hear the whistle of the “Bain Train.” Christophor Bain ran for 2,337 yards and 41 TDs, while catching 10 passes for 266 yards and a TD.

Bain also won a state wrestling title at 195 pounds in his senior year and he is GM’s all-time leading scorer with 99 total TDs.  Bain is currently a linebacker at Southwest Minnesota State University.

Bain was even more dangerous as he lined up next to Zach Myhre, a blocking back, who ran for 1,131 yards and 17 TDs, while catching eight passes for 212 yards and two TDs. Myhre is currently at Winona State, but has battled various injuries on campus.

Advantage: The 2016 team was a wrecking ball on offense and no defense could hope to contain Bain or Myhre, much less both of them. Jacobson was highly impressive as a junior in 2013, but he could not equal the production of GM’s two-headed bulldozer in 2016.

Wyatt Richardson was one of the top wrestlers to come out of GM and he was a big factor on both ends of the line for the 2013 team. His brash attitude matched perfectly with his athleticism as he racked up 91 tackles and 6 sacks, while also getting physical  and moving bodies up front on offense and defense.

Connor King was a fiery leader on both sides of the ball for the 2016 Superlarks and he finished with 110 tackles, eight sacks and four fumble recoveries.

Advantage: Richardson would win a lot of battles up front, but the 2016 team simply had more depth. King had Blake Benson, a big man with a  lot of athleticism, and Kyle Oehlke, who had a non-stop motor, line up next to him, giving the 2016 Larks an edge.

While I’ll always have respect for the 2013 team for bouncing back after a tough loss in the state game, the kids who were playing junior high and JV football during that run must have been paying attention, because they produced an even better team in 2016.

Turnovers would have a big impact on the final score, and neither team gave the ball away much, but I’d give the nod to the 2016 team with a 32-22 win.