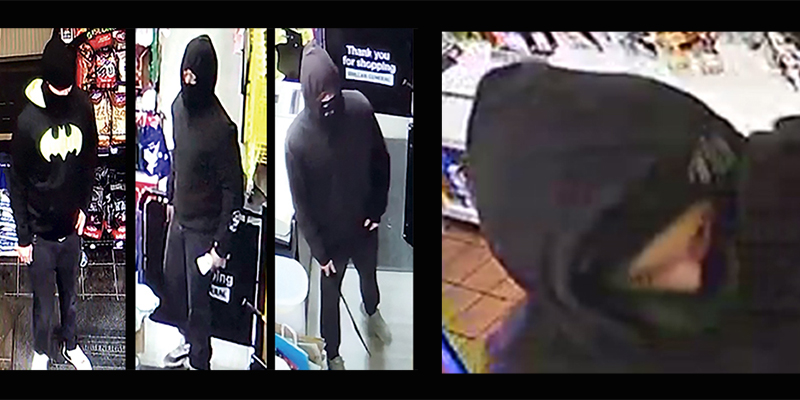 The Austin Police Department is seeking information that could lead to the arrests of armed robbery suspects that robbed the Apollo III gas station and Dollar General store earlier this week.

According to Austin Police Chief David McKichan, police responded to a report of an armed robbery at about 9:39 p.m. on Sunday at the Apollo III gas station at 3011 Oakland Ave. West. It was reported that a single male suspect brandished an approximately 6-inch long knife and threatened the cashier before stealing money from the business before fleeing on foot.

The suspect was described as a white male, approximately 6’ 2” tall and weighing an estimated 200 pounds, wearing a black hooded sweatshirt, black Nike sweatpants, white shoes and one red and one black glove.

Police responded to another armed robbery call at about 8:58 p.m. on Tuesday at the Dollar General located at 101 Fourth St. SW. It was reported that three suspects involved in the robbery got away with money.

The first suspect, who threatened the clerk with a knife, was described as a black heavier-set male that stood about 5’10” tall.

The second suspect was guarding the doors and was described as a white male with a slender build.

The third suspect, also described as a white male, was observed checking the store for customers/witnesses and was said to be armed with a ninja/katana-style sword.

McKichan said police have not established whether or not the robberies were connected.

Anyone with information is urged to call the Austin Police Department at 507-437-9407. Reports can be made anonymously.