Nature Notes: Getting to know the saw-whet owl 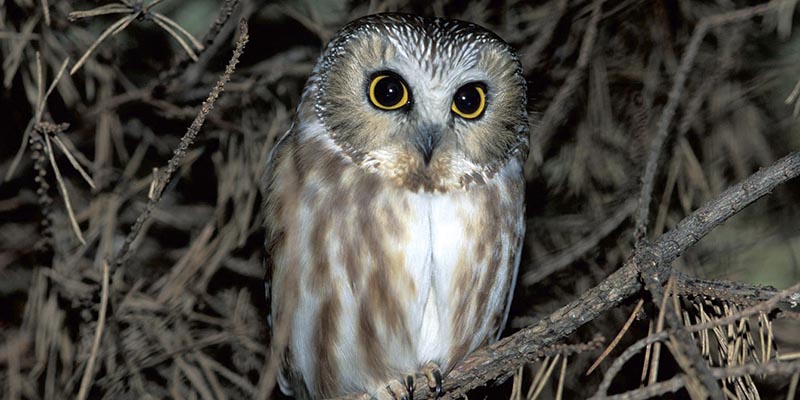 Commonly seen in the boreal region of northern Minnesota and southern Canada, the elusive saw-whet can also be spotted further south.

As the temperatures drop, some saw-whet owls seek new territory further south. If food resources become scarce, these birds also have the incentive to fly in search of a sizable rodent population.

The funny name of this owl comes from early European settlers who discovered the species in a settlement near modern day Nova Scotia. One of the owl’s many calls has been described as a saw being sharpened on a whetting stone. Therefore, the name “saw-whet” was born. This name is a bit old-fashioned now because so many people are unfamiliar with its origin.

Recently, this species has gained media attention following the discovery of Rockefeller the owl in New York. The adult female saw-whet owl was found hiding in the branches of a 75-foot Norway spruce. This particular tree was destined to become the NYC Rockefeller Center Christmas tree, and the owl was accidentally taken along with the tree. As one of the smallest owl species in North America, Rockefeller the owl was able to stow away for a period of three days until she was rescued.

Due to Rockefeller’s celebrity status, many people are curious to learn more about this owl species. It is theorized that since Rockefeller was found in the Oneonta region of New York, she was migrating through the area in search of a winter roosting spot. In the winter, these owls are less picky in terms of territory. They have been found in hardwood forests, edges of forests with dense undergrowth, and even in suburban areas. Unlike other owl species that are frequently observed in the daytime, the saw-whet owl is strictly nocturnal. Combined with its small stature, no more than eight inches tall, this owl can be tricky to spot. You may have a saw-whet owl close to you and not even know it.

As we transition into the winter here in Minnesota, take a hike outside and see if you can spot any owls. Be sure to look closely in tree cavities near forest edges and in areas covered by dense undergrowth like Buckthorn. If you are lucky enough to spot a saw-whet owl, be sure to be respectful and keep your distance. Bring a nice pair of binoculars or a camera lens to get a closer look at this adorable predator.

December at the Nature Center

The Interpretive Center will be closed to the public until Dec. 18. The trails are open to the public from 6 a.m. to 10 p.m. every day. Keep an eye on our social media and website for updates.