This year December belongs to Jupiter and Saturn. The two giant planets put on a show just before they drop over the horizon, on their way to the morning sky.

And what a show it is. On Dec. 21, Jupiter and Saturn will make their closest approach since 1623. Jupiter, with its higher orbital speed, glides just 0.1 degrees—about one-fifth of a moon width—below Saturn. Because this happens in the early morning, when Jupiter and Saturn aren’t visible, the evening of either the 20th or the 21st will be the best time to look. The two planets will be so close that through a small telescope they, along with many of their moons, will fit into a single field of view. 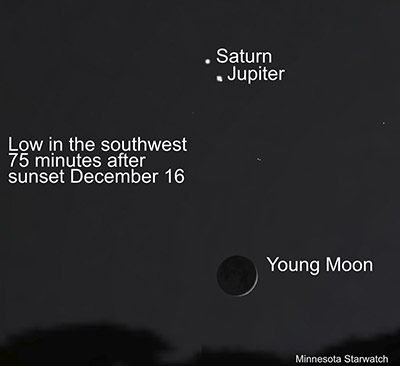 Jupiter regularly overtakes Saturn like this; on average, it passes the ringed planet every 19.6 years. But they won’t get this close again until 2080. To see them, go out as soon as the sky darkens enough to reveal two orbs, one (Jupiter) much brighter, very low in the southwest. Try following the planets’ approach and separation over several days; say, from Dec. 16-23. On the 16th, a very young, thin crescent moon comes out below them, making a pretty trio.

If you have neither a small telescope nor a good friend with one, try binoculars, especially if you can steady them with a tripod. If all else fails, images of the event are sure to pop up online.

Winter arrives officially with the solstice, at 4:02 a.m. on Dec. 21. At that moment the sun reaches a point over the Tropic of Capricorn and begins its annual trek back toward the northern sky. However, although the day length shortens as we approach the solstice, Minnesotans experience the earliest sunset of the year during the first two weeks in December (the date varies slightly with location). After the solstice, our sunrises will still be getting later for several days, but the evening darkness will have begun to shrink.

Our opinion: Get involved in the caucuses