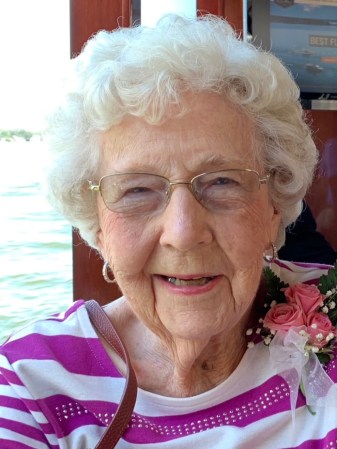 She was born August 4, 1920, the second of three daughters to Gilbert and Clara Johnson in Blooming Prairie, MN. Cookie met the love of her life, Raymond Kubicek, in 8th grade. She described the relationship as a “warm admiration” until they dated for his senior prom.

After high school, Cookie attended Pepin Fashion Academy in Minneapolis. She and Ray were married May 22,1943. Ray served two years in the Army (1944-46) and was overseas 11 months of that, while Cookie waited patiently, praying for his safe return. After he served in Fort Logan, CO, they settled in Austin, MN and started their family.

Cookie enjoyed sewing, quilting, and fishing her whole life. She was a master seamstress, designing and making all kinds of dresses and clothing, even suits for Ray. After Ray’s retirement, they moved to their home on German Lake for the summers and spent the winter months in Lake Havasu City, AZ. Cookie and Ray were married 67 years. They made many great friends wherever they lived. Ray passed away in 2010 and Cookie lived by herself in Austin, MN until she moved to Waconia, MN in 2016.

Cookie was preceded in death by her parents; sister Dorothy Betlach; and husband Ray.

A memorial service will be planned at a future date that allows friends and family to gather in Austin, MN where Cookie will be laid to rest with Ray.

Condolences can be sent to the family in care of Sally Brown, 1547 Sandbar Circle, Waconia, MN 55387.

Arrangements are with the Johnson Funeral Home in Waconia. 952-442-2121 www.johnsonfh.com