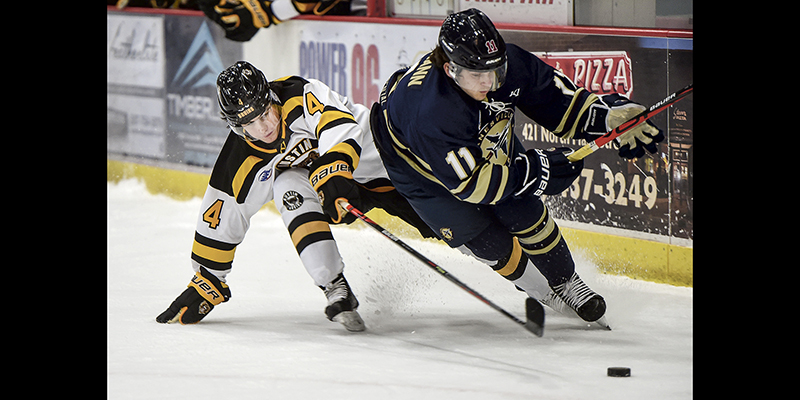 After nearly a month in the Dakotas, Bruins hope to return to Riverside after the break

Life on the road is nothing new to the Austin Bruins, but the shutdown of sports in Minnesota caused the team to get creative in order to keep its season going.

The Bruins spent about a month in North Dakota and South Dakota, staying in hotels and playing hockey as they were kept out of their home ice in Riverside Arena. While the team came up with just three out of 12 possible points from the bubble, the Bruins were able to find some unique bonding time.

“It’s definitely an experience that we’ll never forget. I’ve never been on the road that long,” Austin’s Barrett Brooks said. “We miss Austin, our billet families and their home cooked meals. But I think it brought us together. It was really good to get to know them more.”

The team was able to have its own floor in every hotel it stayed in, which gave players a chance to hang out and socialize. The Bruins spent 10 days of the trip in Minot, where the Minotauros’ owner served as Austin’s bus driver.

“You could see that the Division came together to make it work. It meant a lot for us to get games instead of shutting down. We all appreciate those guys going out of their way to make it work,” Austin’s Cullen Rush said. “It was a lot of fun. We ate out a lot, but it was a lot of fun to just hang out with the guys. You get to know the guys on a different level.”

Austin head coach Steve Howard said the team had guys in and out of the lineup, which made it difficult to gain momentum on the ice. But overall, he’s glad the team was able to keep its schedule going and he thinks the time on the road was well spent for team bonding.

“It was a good setup and we were able to get settled in. We were able to get food delivered to us and Aberdeen, Minot and Bismarck were all great. They took care of us on the road,” Howard said. “Making (lineup) changes on the road is always tough. We had to fly some guys into Minot. Hopefully in the second half we can get everybody on the ice together and we can start moving forward.”

The NAHL has been battling uncertainty ever since last year’s season was called off due to the COVID-19 pandemic. This season has seen cancelled games, player quarantines and makeshift schedules.

“It’s kind of a day by day thing that we do. We have to stay positive throughout the whole thing,” Brooks said. “Somebody could be dealing with something with their family and we’re trying to keep a positive attitude because we don’t know what somebody is dealing with. It’s crazy, but it’s something that teaches you to live your life day by day and be thankful for what you have.”

Rush said that it’s been a tough year, but he’s looking forward to getting back in Riverside Arena.

“It’s tough when there’s that uncertainty. You don’t really know who might be out of the lineup, but we’ve got enough guys that are able to step up and fill those roles. We’re confident with the guys we do have in the lineup and I think we’ve been able to battle through. The younger guys have been a welcome surprise,” Rush said. “I miss being in Austin so much. It’s awesome playing there. It’s so much nicer being at home and having that energy for you instead of against you.”

The Bruins have played eight straight games on the road and they haven’t played in front of their home fans since Nov. 20.

Austin recently announced that its home games schedule for Dec. 31, Jan. 1 and Jan. 2 have been postponed. Ownership and management groups for all four teams involved in the postponement are working diligently to assign new dates for the games. Information will be made available to the public once these decisions have been agreed upon.

For fans who purchased tickets to the Bruins home games scheduled for Dec. 31 or Jan. 2, the Bruins will be issuing an automatic refund in the coming days. If a refund is not showing by Dec. 28, please contact the Bruins front office at 507-434-4978.

The Bruins can count themselves fortunate that they have been able to keep competing this winter. The COVID-19 schedule changes have caused a lot of difficulties with the NAHL. While Austin has played 11 games, there are seven teams out of 23 teams in the league that have played just six games or less so far this season.