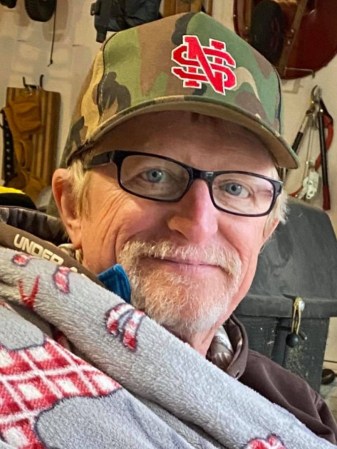 Gary (Goose) Eugene Goslee passed away peacefully, Thanksgiving morning, November 26th, 2020 at the home of his daughter in Eldridge, IA after fighting a three and a half year battle with Glioblastoma Mulitforme, brain cancer. Gary was born on October 17, 1953 to Donald and Rosemary Goslee in Austin, MN and was the second oldest to five doting sisters and only one bathroom. He graduated from Austin High School and Austin Technical Institute in Radio and TV Broadcasting. Gary was charismatic and was hired at KAAL TV and wore many hats including Sales, Director, Producer and starred in commercials and voice overs. Gary was very innovative and creative and was responsible for televising and producing the Miss Minnesota Pageant when it used to be held in Austin. At the end of his career, Gary worked as a Lean Process Specialist for Hearthside Food Solutions.

Gary’s life was filled with much love for his daughter and grandsons. He had a great love of life, family and people in general and had many friends. He loved children and they immediately became his “buddy” after meeting. Visiting Kelli and Joe and attending his grandsons many activities was the highlight of his life. He also had a great love for the outdoors and spending time camping at Sallie and Dave’s lakeside property with his family all bringing campers. Gary was a member of Unity Christ Church in Golden Valley and also spent many Saturdays making dinner at the Family Place homeless shelter. He also enjoyed music, fishing up north and “yelling” at the Vikings and Twins and attended games whenever possible.

He was a kind, generous, witty soul who bore the burden of cancer with a positive, hopeful attitude and will be missed by so many. While spending time at the Hope Lodge in Rochester during Cancer treatments, Gary and his life-long friend Mike (Bernardy) were known for making amazing meals for the guests as well as being a beacon of Hope for many fighting Cancer. We are beyond thankful for every minute he was in our lives. He was a fighter, a Dad, a son, a grandpa, a brother, a friend, a creative genius, a storyteller, and a bright light in the lives of everyone that met him. We are all better for knowing him.

A celebration of life will be held in Austin, MN in the spring to honor Gary.