Flying with the Eagles 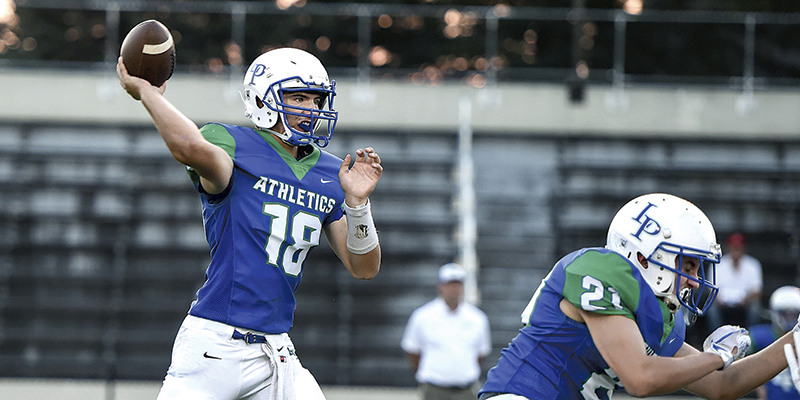 Lyle-Pacelli’s Jed Nelson passes in the first half against Houston at Art Hass Stadium in 2019. Herald file photo

After losing a chunk of his high school sports career, Lyle-Pacelli senior Jed Nelson is going to make up for lost time.

Nelson has been a standout for the Athletics in basketball, baseball and football for the better part of his high school years, but his baseball season was cancelled last spring and he missed a big part of football and basketball this year due to the COVID-19 pandemic.

Nelson used some of that time to find his future. He recently committed to play Division III football at the University of Wisconsin-La Crosse. Although he has enjoyed deep tournament runs with the L-P baseball and basketball teams, Nelson has always wanted to stick with football.

“It wasn’t really that hard to choose football,” Nelson said. “Around my junior year, I was leaning towards playing college football. It’s always been the sport that I’ve had fun playing, even though our record hasn’t been that good over the years. I’m very excited about playing in college. La Crosse has a great history of winning and success. I’m excited to be part of that program.”

With the pandemic making it difficult for all college recruits, Nelson had to be proactive to get noticed by the Eagles. He filled out a recruit questionnaire on the school’s website and sent in some of his highlights to draw interest.

Now Nelson is set to play at the college level and he’ll be learning a new position. L-P used Nelson at quarterback, linebacker, running back, wide receiver and special teams, but he’s expecting to play tight end for the Eagles. Jed’s dad Joel played tight end at South Dakota State University before moving to center, and he’ll likely help his son learn the position.

“In my junior year, there was a week of practice where I played some tight end, but I’ve got a lot to learn,” Nelson said. “My dad and my uncle Mark (who played fullback at SDSU) were big influences on me and I want to keep that going. I think my dad is pretty excited about it, once the weather gets nice we’ll get out on the field and he’ll work with me.”

Nelson played in five games for L-P this past fall and finished with 41 tackles and two interceptions on defense. On offense, he ran for 379 yards (7.3 per carry) and four TDs. He also has over 1,200 career points for the Athletics boys basketball team.

L-P head football coach Brad Walter considers Nelson to be an ideal athlete for any program.

“Jed works extremely hard every day, and is someone the rest of the players can look up to. He does everything you ask from him, and does it to the best of his ability,” Walter said. “The other players on the team look up to Jed because he is a great athlete, but more importantly a great kid. It has always been the thought that this year would be some of the best in the history of the two schools with Jed being a huge part of the success. Jed will be extremely missed as an athlete when he graduates, but missed even more by the great young man that he is.”

With his future locked up, Nelson is now hoping he gets to finish his time with the L-P basketball and baseball teams in the arena. Like all athletes, Nelson has had his patience and focus tested over the past few months.

“It’s tough. Every athlete wants to get started and get going, but we have to do what the rules are and stay strong minded,” Nelson said. “I’ve been lifting weights and going for runs. We have to be ready for when we get a chance to play.”

The Eagles went 7-3 overall in 2019 and had their season cancelled this fall due to COVID-19.