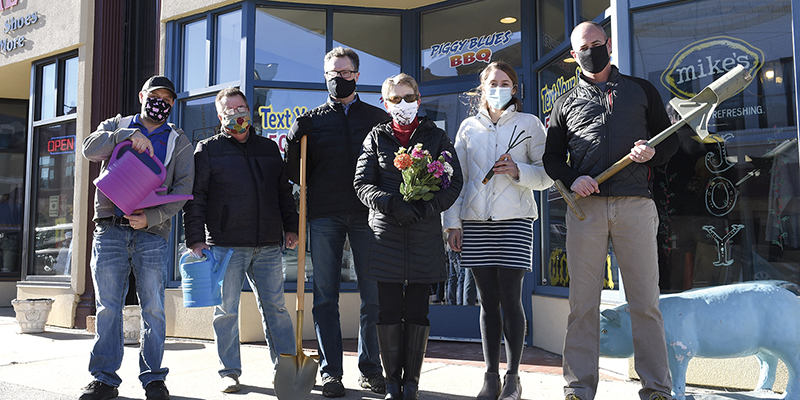 Organizers of the annual fund drive to raise money for downtown flower baskets have kicked off the annual fundraiser working once again to beautify Austin. Eric Johnson/photodesk@austindailyherald.com

The drive is on.

For the 26th year, organizers are holding their annual drive to raise money for flower baskets downtown and throughout Austin.

Even though COVID-19 is putting a mark on this campaign, the organizers are still optimistic as they stand behind what the flowers mean to Austin.

“When you’ve donated to something, it adds to the feeling of ownership and pride,” said Bonnie Rietz.

However, Rietz and other organizers also recognize that people may not be able to give as easily as in the past. At the same time, she hopes people will still consider giving for the future beauty the flower baskets provide.

“The challenge of course with COVID-19 and people is the finances and it’s just such an unsettling, unusual time for people,” Rietz said. “We surely understand this year if people aren’t able to donate. If they are able to donate, it’s a great time to have flowers. Hopefully by next summer we will be out and about and we will want those flowers on Main Street and around the community.”

As Rietz looks back at the previous 26 years, she does see some comparisons to past drives, particularly in 2003 when the country was in the grips of the financial crisis. At the time, Rietz was a city council member.

“One of the things I remember, the program was going along really well and it was the year 2003 and we were in the financial crisis and the money was cut mid year,” Rietz said. “That next year there was opposition on the council. It was a 4-3 vote to not do the flowers. At that point it was always funded by the city government and I said in a week if I can get half the funds from the community, would the City Council be willing to pay for half.”

“The money just came in,” she added.

Since 2004, money has come from three sources: the City of Austin, Hormel Foods and individual and business donations.

Money can be donated through mid-January, when organizers and Hillside Nursery in Hollandale need to know how many plants to order.

This is also a different year in that the flower baskets have received support from a former mayor (Rietz), current mayor (Tom Stiehm) and future mayor (Steve King).

Not only that, but the drive has also received support from Impact Austin in the form of Coordinator Mary Ann Duren, who is also a part of the fundraising effort.

Those who would like to donate to the flower baskets can send a tax-deductible check made out to the City of Austin with “Flowers 2021” written in the memo to Tom Dankert, 500 Fourth Ave. NE.