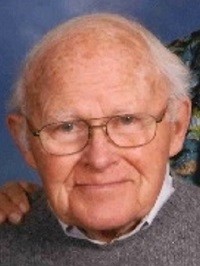 Earl Day died Saturday, December 5, 2020, at the Three Links Care Center at the age of 91. Interment will be held at a later date.

Earl was born in Clarke County, Iowa on January 22, 1929, the son of Della and Virgil Day. He graduated from Osceola, Iowa High School and soon after moved to Austin, Minnesota. He was employed at Hormel Foods from 1948 to 1985. He was united in marriage to Elizabeth Amundson on February 27, 1954. He resided in Austin until they moved to Northfield to be near family.

Earl was a member of Grace Lutheran Church in Austin where he was active in church activities. He was involved with the Boy Scouts for 12 years. He enjoyed all outdoor activities, boating, water skiing, fishing, hunting, snowmobiling, canoeing with Loren and Michael. He walked or rode his bike every day. He also traveled across the country camping with his family.

After retirement, Earl and Liz spent winter months in Apache Junction, Arizona in their trailer. He loved hiking with a group of avid hikers in the mountains. More than once to the bottom of the Grand Canyon and even staying overnight one time.

Earl is survived by his wife Elizabeth; son Loren (Debbie); grandson Michael (Crystal); his granddaughter Laura Simonson (Sean); two great-granddaughters Maren and Madison, all from Northfield. He is also survived by his son-in-law Ron Smith of Ammon, ID; sister-in-law Phyllis Day of Springfield, MO; and his cousin Marian Barnard (Eldon). He was preceded in death by his daughter Cheryl Smith; his parents, his sister Aletha Johnson, his brother Vern Day; and brother-in-law George Johnson.